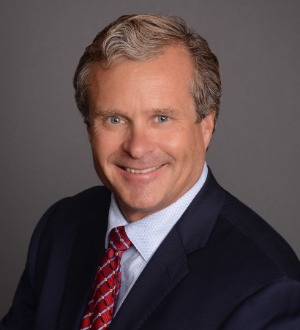 David Carter was born in Vero Beach, Florida, and has been a partner at Gould Cooksey Fennell since 1996. Mr. Carter founded and chairs the firm’s Personal Injury & Medical Negligence Group and serves on the firm’s Executive Committee.

Mr. Carter graduated with honors from the University of Florida College of Law where he was a member of the Order of the Coif and Senior Symposium Editor for Law Review. Upon graduation, Mr. Carter accepted a position with the Tampa law firm of Trenam, Simmons, Kemker, Scharf, Barkin, Frye & O’Neill, gaining early experience in cases involving personal injury, medical malpractice and wrongful death.

Since returning to Vero Beach and joining Gould Cooksey Fennell, Mr. Carter has been recognized for his work in litigating cases involving catastrophic injuries and death on behalf of the firm’s clients. Recent jury verdicts and settlements in personal injury and medical malpractice cases rank among the highest awards in personal injury cases in the county’s history.

Mr. Carter is Board Certified by the Florida Bar as a specialist in Civil Trial Law. He maintains an “AV” rating by Martindale-Hubbell, the largest and most comprehensive ratings document of lawyers in the world.

Since 2012, Mr. Carter has been included in the U.S. News and World Reports Best Lawyer rankings. In 2015 and 2021, that publication named him Personal Injury Litigation Plaintiff’s Lawyer of the Year for the Orlando area which encompasses 46 cities and 9 counties including Indian River, Osceola, Orange, and Brevard. He is the only Treasure Coast attorney to achieve this distinction.

From 2006 through the present, he has been named a “Super Lawyer” by Law & Politics Magazine. In 2016 and 2020, he was named as one of the Florida Trend “Legal Elite” in Civil Trial, a title only given to the top 1.4% of Florida lawyers. He was also invited as a member of the American Board of Trial Advocates. He maintains an Avvo rating of 10/10 and has been a member of the National Association of Trial Lawyers “Top 100” since 2016. After appointment by Florida’s Governor, Mr. Carter has twice served on the 19th Judicial Circuit’s Judicial Nominating Commission.

Mr. Carter has been named a Distinguished Fellow of the Florida Justice Association and served on the organization’s Board of Directors for nearly a decade. He continues to speak at FJA’s continuing legal education seminars on justice topics.

As a fourth generation Floridian, Mr. Carter is a member of one of Vero’s pioneer families. His great-grandfather, a land surveyor who moved to the area in the early 1900’s, is credited with staking out the original town of Vero Beach.