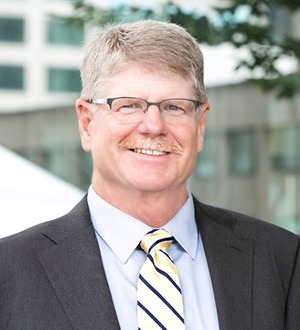 Tim Leyh is an accomplished trial lawyer with over 30 years’ experience representing individuals, businesses, and state and local governments in complex and high stakes matters. His clients and colleagues know him not only as a litigator and trial lawyer, but also as a superb problem solver.

Tim is consistently recognized as a Top 100 lawyer by Super Lawyers.  He has been described by Chambers and Partners as a “terrific strategist who cuts to the heart of things in a remarkable way and is excellent at arguing in court,” and “one of Seattle’s finest lawyers.”  Benchmark Litigation calls Tim a “Local Litigation Star” and a “very classy litigator.” Tim is a Fellow in the American College of Trial Lawyers and in the Litigation Counsel of America.

In addition to his trial work, Tim has argued numerous times before the Washington State Supreme Court, as well as state and federal appellate courts throughout the U.S.

Tim has been the Managing Partner of the firm since 1996. He took a sabbatical year to sail with his family to the Society Islands, Tonga, Samoa, Hawaii, and home. Tim is an avid skier, cyclist, and horseman. He lives on Bainbridge Island.

Served as lead trial counsel along with Tyler Farmer, Kristin Ballinger, and Shane Cramer successfully defending a Seattle technology company against claims alleging breach of contract, fraud, and theft of confidential information. HLFT was retained at the close of discovery to try the case after multiple dispositive motions had been denied and mediation had failed. The plaintiff sought over $27 million in damages. After a five-week trial in King County Superior Court, the jury rejected all but one of plaintiff’s claims and awarded only $72,915 in damages (0.26% of the amount sought). The jury also found the plaintiff liable for breach of contract, and awarded damages to our client. HLFT then prevailed on all post-trial motions, with the Court reversing the one adverse jury verdict and awarding our client over $2 million in attorneys’ fees and costs.

Led a team of the firm’s lawyers representing the City of Mercer Island in its widely publicized fight to mitigate the impacts of the closure of the center express lanes of I-90 as part of Sound Transit’s expansion of light rail to Seattle’s eastside. The case involved intense litigation in multiple forums, including the state trial court, the Growth Management Hearings Board, the Shorelines Hearings Board, and the State Supreme Court. After hearings on a diverse range of issues, and just ahead of a hearing on the City’s request for an injunction, the City Council accepted a settlement offer of $10.1 million in mitigation payments from Sound Transit.

Currently leading a team of the firm’s lawyers defending Snohomish County from wrongful death, personal injury and property damage claims arising from the March 2014 Oso Landslide in which 43 people were killed. In the trial court, all claims by all plaintiffs against the County were dismissed. The Washington Court of Appeals affirmed the dismissal and the Washington Supreme Court denied review.

Represented the State of Washington defending claims by a class of approximately 100,000 part-time and seasonal employees for wrongful denial of health insurance benefits. Plaintiffs sought damages in excess of $500 million. The case was settled in mediation following a series of favorable trial court rulings for a fraction of the amount claimed.

Successfully represented the State of Washington defending claims by a class of current and former state employees who challenged legislative changes to retirement benefits. The amount at issue exceeded $7 billion. The trial court ruled in favor of the plaintiff class and held the legislation was unconstitutional. The Washington Court reversed and ruled in favor of the State in a unanimous opinion that the legislation was valid.

Served as lead trial counsel successfully defending King County against $250 million in claims by regional water and sewer districts relating to the operation and funding of the County’s Wastewater Treatment Division. After a six-week trial in Pierce County Superior Court, the Court ruled in favor of King County. On appeal, the State Supreme Court unanimously affirmed the trial court’s rulings in favor of King County.

Served as lead counsel representing the Port of Seattle opposing the enforcement of the City of SeaTac’s $15 minimum wage ordinance at Sea-Tac Airport, where the Port has exclusive jurisdiction under State law. The trial court ruled in favor of the Port. The Washington Supreme Court reversed that decision.Served as lead counsel defending the Port of Seattle against claims by taxpayers seeking to invalidate the Port’s $81 million purchase of the Eastside Rail Corridor in 2009. Plaintiffs alleged the purchase was outside the Port’s authority and a misuse of public funds. After extensive discovery, the trial court denied class certification. The trial court then dismissed all of the plaintiffs’ substantive claims on summary judgment. The Court of Appeals affirmed. The State Supreme Court denied further review.

Together with Art Harrigan, Tim represented the Port of Seattle in connection with a highly publicized federal criminal investigation of the Port’s contracting practices in the construction of the Sea-Tac Airport Third Runway. Tim later represented the Port in subsequent criminal investigations relating to the severance benefits awarded by the Port to its former Executive Director, and to operations of the Port’s Industrial Wastewater Treatment Plant. No charges were brought against the Port or any current or former Port employee as a result of any of these investigations.