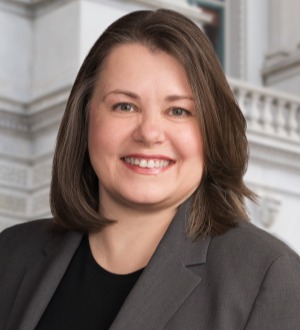 Recognized by Best Lawyers® since 2020.
1717 Pennsylvania Avenue, NW, Suite 500 Washington, District of Columbia 20006-4623
(202) 289-1313
|
Firm: Barnes & Thornburg LLP
|  Website
Edit Profile
Edit Your Profile
To edit your Lawyer Directory information, please login to your
Best Lawyers® Admin Account.
If you have any questions or need assistance, please contact us at info@bestlawyers.com or 803.648.0300.
Overview
Firm

Teresa's accessibility and disability practice focuses on all facets of compliance with the Americans with Disabilities Act of 1990 (ADA), Sections 504 and 508 of the Rehabilitation Act of 1973, the Fair Housing Amendments Act of 1988, and analogous state and local laws. She advises and counsels owners/operators of a wide array of places of public accommodation, including hospitality and lodging, retail, sports and entertainment facilities, amusement parks, institutions of higher education, transportation, and healthcare facilities; housing; commercial facilities; and state and local government facilities subject to Title II of the ADA. Her practice includes advising and representing clients with respect to issues pertaining to accessibility of physical facilities, digital accessibility (e.g., websites, mobile sites, mobile apps and other technology), effective communication, auxiliary aids and services, testing accommodations, and non-discrimination in operating policies, practices and procedures.

In her employment practice, Teresa advises and assists employers with respect to the employment relationship generally, including personnel decisions, drafting employment and severance agreements, preparing and reviewing personnel policies and procedures, reasonable accommodation decisions, leave issues, and harassment. She also has authored several amicus briefs to the United States Supreme Court on issues pertaining to the Employee Retirement Income Security Act of 1974 (ERISA).

Teresa has lectured and taught seminars on accessibility and disability issues, discrimination/equal employment law, the FMLA, ERISA and privacy issues. She has prepared a toolkit on the 2010 ADA Standards for Accessible Design for a national trade association, assisted in the preparation of an employment guide, "The Americans with Disabilities Act: Next Steps for Employers," produced for the National Organization on Disability and BusinessWeek, and has co-authored a Title III ADA staff training manual for a Fortune 500 company. Teresa has also been listed as a Recognized Practitioner in Chambers USA: America's Leading Lawyers in Business since 2017.

She is admitted to practice law in the District of Columbia, Virginia and Pennsylvania.