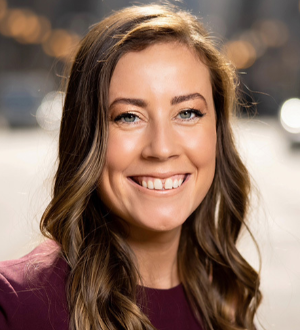 Sarah F. King is one of Chicago’s rising medical malpractice lawyers at the firm and one of the most hard-working, intelligent attorneys one can find. She works tirelessly to investigate and prepare complex medical malpractice cases to achieve justice for those who have been harmed by medical negligence. She works with dedication and tenacity to get to the bottom of what actually happened and what proper practices should have been used to prevent injuries related to medical care. It is this passion that makes her one of today’s top Chicago medical malpractice lawyers.

Sarah has had substantial trial experience as an attorney of record in many of the firm’s trials. In less than a decade, Sarah F. King has received verdicts and settlements totaling nearly $300 million. For example, Sarah second-chaired a trial with partner Bradley Cosgrove in a two-week trial involving the negligent prescription of Yasmin that gained international attention. A 37-year-old woman took the medication for less than two weeks and suffered a debilitating stroke. The jury awarded her $13.55 million in March 2014. Sarah also tried a case alongside partner Keith Hebeisen, leader of the medical malpractice team at Clifford Law Offices, in November 2013 that involved the wrongful death of a 33-year-old mother who sustained a massive hemorrhage during a c-section. Following a three-week trial, the jury returned a verdict of $15.55 million for the family. In January 2013, Sarah tried another case with Hebeisen and obtained a $2.225 million verdict for the wrongful death of a 31-week fetus.

In 2019, Sarah obtained a record $101 million verdict on behalf of a baby boy who was brain damaged at birth when his external fetal monitoring strips were ignored for six hours. Experts on behalf of the plaintiff testified that he would have been born a normal baby if hospital nurses and other medical personnel would have alerted doctors to the abnormalities and performed an emergency C-section.

While she was a full-time law student, Sarah served as a law clerk to Keith Hebeisen and Susan Capra. Having been mentored by two of the most respected and recognized medical malpractice lawyers in the state, Sarah understands what it takes to bring such complicated cases to trial, works up cases through analyzing the medical records, preparation of meticulous court pleadings, working with medical experts, and preparing her clients for every step of the litigation process. She has developed the highest level of skills as a Chicago medical malpractice attorney.

Sarah graduated from DePaul University College of Law summa cum laude as a member of the top 5% of her class and was inducted into the Order of the Coif. She was a published member of the DePaul Law Review on post-death maintenance obligations and life insurance. She has published several articles, some of which have been published in national publications such as the highly regarded American Bar Association Litigation Journal. Sarah has also been recognized for her writing skills in law school, having received the CALI Award for Excellence in Trial Advocacy II, Legal Writing III, and Commercial Paper. Sarah completed her undergraduate studies at Loyola University of Chicago where she received her Bachelor of Arts in English and Women’s Studies.

Sarah has been involved in Women Everywhere: Partners in Service Project, which is a collaborative effort, coordinating volunteer activities to help women and children through Chicago, www.weChicago.org. She has been active in the Women’s Bar Association of Illinois (WBAI) and Illinois Trial Lawyer’s Association. She also devotes time to teach a course on Medical Malpractice as an adjunct professor at her alma mater, DePaul University College of Law.