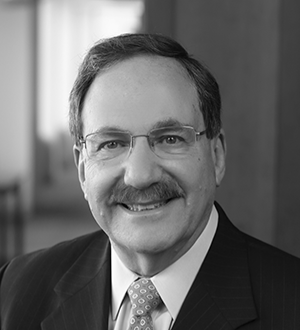 Recognized by Best Lawyers® since 2003.
20 Church Street, 16th Floor Hartford, Connecticut 06103
(860) 297-3700
|
Firm: Wiggin and Dana LLP
|  Website
Edit Profile
Edit Your Profile
To edit your Lawyer Directory information, please login to your
Best Lawyers® Admin Account.
If you have any questions or need assistance, please contact us at info@bestlawyers.com or 803.648.0300.
Overview
Firm

Bob is recognized as one of the country's foremost authorities on antitrust, consumer protection, and trade regulation law. He possesses unparalleled experience in counseling, litigation, and regulatory investigations in the field, and he is co-author of the definitive treatise on unfair trade practices and antitrust legal practice.

A Partner in the firm's Litigation Department and Co-chair of the firm's Antitrust and Consumer Protection Practice Group, Bob's experience includes class actions and representing clients in both federal and state courts and before the Federal Trade Commission, the Antitrust Division of the U. S. Department of Justice (DOJ), and offices of state attorneys general and state consumer protection agencies throughout the US.

Bob leverages more than two decades of experience as Assistant Attorney General in Connecticut, where he litigated numerous antitrust and consumer matters in federal and state trial and appellate courts. His four decades of accomplishments have earned him a host of prestigious accolades, including:

Bob is a Charter Fellow and former Chair of the James W. Cooper Fellows Program and a Fellow of the American Bar Foundation

In September 2005, at the behest of a Congressional commission, Bob was one of three participants to testify on the subject of the state action immunity doctrine.

From 1990 to 1992, Bob served as Chair of the NAAG Multistate Antitrust Task Force. NAAG established the now commonplace model of multistate attorney general cooperation in consumer protection. That model was born with Bob's and others' work in the 1970s to forge a landmark agreement with General Motors for secretly installing Chevrolet engines in Oldsmobiles.

Bob has participated in numerous pro bono initiatives, including the Fair Factories Clearinghouse (FFC), which, after Bob helped FFC obtain a successful Business Review Letter from the Antitrust Division of the DOJ, now shares documented data about wages and working conditions in foreign manufacturing settings, and shares Advisory Opinions from the Federal Trade Commission to enable healthcare nonprofits to pass savings on to their employees and others. As a Cooper Fellow, he helped launch a program to capture the oral histories of pioneering women in the law in Connecticut.

Bob lectures and writes regularly on antitrust, consumer protection, and healthcare topics. Bob is the co-author of Unfair Trade Practices, Business Torts and Antitrust, a treatise for Connecticut judges, lawyers, and academicians. His op-ed articles have appeared in The New York Times and The Hartford Courant.