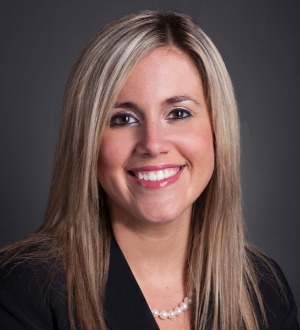 Recognized by Best Lawyers® since 2019.
600 Third Avenue Kingston, Pennsylvania 18704
(800) 760-1529
|
Firm: Hourigan, Kluger & Quinn, PC
|  Website
Edit Profile
Edit Your Profile
To edit your Lawyer Directory information, please login to your
Best Lawyers® Admin Account.
If you have any questions or need assistance, please contact us at info@bestlawyers.com or 803.648.0300.
Overview
Firm

Nicole M. Santo, a Principal of Hourigan Kluger & Quinn and member of the Personal Injury Team, joined the firm in 2010.  Her practice is focused on litigating all types of personal injury claims, including medical malpractice claims, motor vehicle accidents, trucking accidents, products liability, and crashworthiness claims.  Since joining the firm, she has been involved in the litigation and settlement of multiple complex cases, including the Kuchwara and matters, as reported in the Verdicts & Settlements section of this website, and other cases which have resulted in confidential settlements.  She prides herself on being passionate about her cases and working hard for her clients so they can obtain just compensation for their injuries.

Attorney Santo was born and raised in Northeastern Pennsylvania, graduating from Wyoming Seminary in Kingston. She earned her bachelor’s degree in political science, public relations international studies, with a minor in Spanish from The Pennsylvania State University. While at Penn State, she spent a semester studying in Barcelona, Spain, served as president of Gamma Phi Beta sorority and was a member of the National Society of Collegiate Scholars.

In 2010, Attorney Santo earned her law degree from Widener University School of Law in Harrisburg, where she was named valedictorian of her class and graduated summa cum laude. While at Widener, she earned awards for receiving the highest grade in six of her classes, served as president of Widener’s Student Bar Association, and was a member of the Moot Court Honor Society. Attorney Santo and her partner were the first back-to-back winners of Widener’s Delaware-Harrisburg Internal Moot Court Competition, and she was chosen as the Best Oralist of the 2010 competition. She also served on the editorial board of the Widener Law Journal, where she organized a comprehensive symposium, “Internet Expression in the 21st Century: Where Technology and Law Collide,” and published a survey, “Delineating the Power of the Governor and the General Assembly with Respect to Appropriations in Pennsylvania: An Analysis of Jubelirer v. Rendell.” At graduation, Attorney Santo was presented with the Dean Anthony J. Santoro Outstanding Service Award and the James S. Bowman American Inn of Court Award.

Prior to joining HKQ, she served as a legal intern in the Office of Attorney General’s Bureau of Consumer Protection and the Public Utility Commission’s Law Bureau. She also served as a judicial clerk for Pennsylvania Supreme Court Justice J. Michael Eakin. She is currently licensed to practice law in both Pennsylvania and New and is a member of the Luzerne County and Pennsylvania Bar Associations.