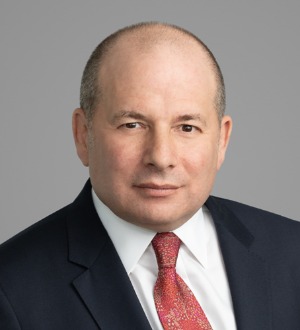 Recognized by Best Lawyers® since 2012.
525 West Monroe Street Chicago, Illinois 60661-3693
(312) 902-5200
|
Firm: Katten
|  Website
Edit Profile
Edit Your Profile
To edit your Lawyer Directory information, please login to your
Best Lawyers® Admin Account.
If you have any questions or need assistance, please contact us at info@bestlawyers.com or 803.648.0300.
Overview
Firm

Former Illinois Director of Insurance Nat Shapo litigates, argues and briefs cases in federal and state appellate and district courts throughout the country for a variety of clients. He represents insurers, licensees and insurance trade associations in regulatory and public policy matters in dozens of states and with federal agencies and the National Association of Insurance Commissioners (NAIC).

During his four years as Illinois insurance commissioner, Nat was elected to the NAIC Executive Committee four times, twice as a national officer. He chaired several NAIC committees and was the lead US regulatory negotiator of an historic $275 million settlement with the German government and insurance companies for unpaid Holocaust era policies. He consulted with Congress and federal bank regulators on the drafting and implementation of the Gramm-Leach-Bliley (Financial Services Modernization) Act and helped draft the NAIC Statement of Intent for the Future of Insurance Regulation.As director, Nat promulgated rules and regulations to implement Illinois' Managed Care Reform and Patient Rights Act. He also sought and obtained passage of laws that eliminate the use of race as a factor in life insurance rating practices, ensured greater accountability in the corporate governance of insurance companies, and monitored and provided civil redress against organized insurance fraud. Nat is a lecturer in law at the University of Chicago. He testifies regularly before Congress on insurance matters. He is also the author of a chapter on insurance rating and risk classification and the editor of the life insurance volume for the leading Appleman on Insurance (LexisNexis) treatise.