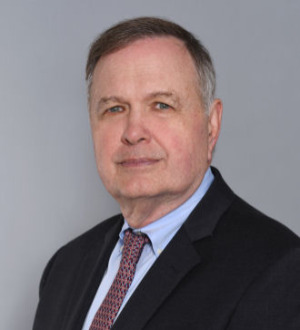 Kenneth R. Larywon is a senior partner and trial attorney, focusing his practice on the defense of professional liability cases and healthcare law matters.

For over 30 years, Mr. Larywon has defended physicians and hospitals in claims arising out of the delivery of medical care. He has also represented healthcare professionals in disciplinary proceedings before the Office of Professional Medical Conduct and the Department of Education.

Mr. Larywon has extensive experience in counseling and defending hospitals, and in physician and nursing staff credentialing matters. In this regard, Mr. Larywon has counseled hospital clients on many cases involving the successful removal of healthcare professionals from their medical staffs. This includes advising clients on the steps to be taken, representing and advising them at hearings and defending their decisions before the Public Health Counsel.

On over 100 occasions, Mr. Larywon has lectured on risk management issues to physicians, nurses, and other healthcare professionals at many hospitals in the metropolitan area. He has lectured to the American Academy of Opthalmology on medical malpractice issues. Mr. Larywon has also lectured to various associations including a presentation to the American Association of Health Plans entitled “Using Proper Credentialing to Avoid Negligence Based Lawsuits.”

Mr. Larywon co-authored a series of articles about managed care issues for the New York Law Journal.  The topics included the competing interests that would be considered by the U.S. Supreme Court in the case of Pegram v. Herdrich, an analysis of the decision of the Supreme Court in the Pegram case, and a discussion of managed care organization liability under the Texas Healthcare Liability Act as a precursor of a possible statutory methodology in the Bush administration.  Mr. Larywon also lectured on this subject to the Health Law Section of the New York State Bar Association.  He has been a Course Instructor on Defending Ophthalmologists in Medical Malpractice Lawsuits at the Annual Meeting of the American Academy of Ophthalmology from 2012-2015. He has also chaired and lectured for a course entitled Medical Malpractice Across the Globe at the 2015 meeting of the Asia-Pacific Academy of Ophthalmology and will be chairing a similar program at the World Congress of Ophthalmology in 2016.

Mr. Larywon has co-chaired a state-wide New York State Bar Association program entitled, “Representing Physicians and Other Healthcare Practitioners in the Professional Disciplinary Process.” In addition to co-chairing the program, Mr. Larywon lectured on OPD issues. Mr. Larywon has also co-chaired similar state-wide New York State Bar Association programs in the past.  Since 2006, Mr. Larywon has been selected for inclusion in New York Super Lawyers by his peers.  He is AV® rated by Martindale-Hubbell® which is their highest rating. Mr. Larywon was selected for inclusion by his peers to 2016 Best Lawyers in America.

Prior to joining MCB, Mr. Larywon was an Assistant District Attorney in Bronx County. During his tenure at the District Attorney’s office, Mr. Larywon earned assignment to the Major Offense Bureau, a model pilot project for the prosecution of violent recidivist offenders. Mr. Larywon has utilized his criminal expertise in advising healthcare clients on matters involving investigations being conducted by both Federal and State prosecutors. He has also been instrumental in convincing courts to recognize the confidential nature of quality assurance documents and to quash Grand Jury subpoenas demanding production of quality assurance materials.

Mr. Larywon is admitted to practice in the Courts of the State of New York, and the United States District Courts for the Southern and Eastern Districts of New York. He earned his law degree in 1978 from Notre Dame Law School. He is a 1974 graduate of the College of Santa Fe in New Mexico. Mr. Larywon was an Adjunct Associate Professor of Business Law at Iona College from 1981 to 1991.  Mr. Larywon is an active member of the New York State Bar Association, and the Bronx Bar Association. He is also a member of the National Health Lawyers Association and the ABA Health Lawyer's Section.