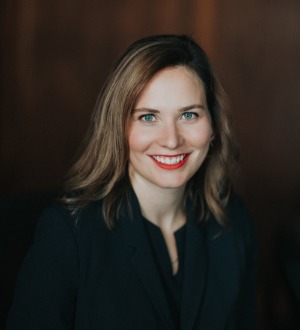 Julie works tirelessly to achieve the desired outcomes for her clients and to educate them about the often misunderstood realities of defending a criminal case.  Her passion for her clients has been quickly recognized and respected by judges and her adversaries in state and federal courts, and both know that she will not back down when faced with unanticipated obstacles.  The same holds true when defending students accused of misconduct or Title IX violations at colleges and universities.  Julie carefully considers when best to use certain litigation strategies and confidently presses her adversaries in order to exercise and protect her clients’ rights.

Julie’s trial results have earned the respect of the legal community, and she has attained significant victories despite her relatively short time in private practice.  Since joining E. Stewart Jones Hacker Murphy, Julie has joined forces with James Knox and E. Stewart Jones, Jr. to defend against countless state and federal felonies.  The guiding principal of her practice is that significant criminal cases require the attention of a team and if a case is to proceed to trial, at least two attorneys will prepare the client and their family and zealously defend the client from the counsel table.

Although she is a passionate trial attorney, some of her greatest victories are when trial or even criminal charges are avoided because of a dismissal of an indictment, a favorable plea bargain, or representation during a government investigation.  Julie always considers the entire impact a criminal case has on a client and often advises and represents clients on collateral matters including litigating parallel civil enforcement proceedings or defending a client’s professional license following criminal charges.  Should an appeal be required in a client’s case, she is trained as a former New York State Court of Appeals judicial clerk to draft and argue cases before appellate courts.