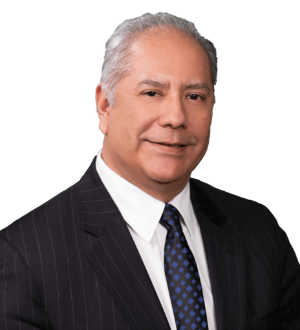 Phone Number (630) 938-7630
John Castaneda has 25 years of experience handling Illinois workers' compensation claims. During his career, he has briefed and argued many cases before the Illinois Workers’ Compensation Commission, various Circuit courts and the Appellate Court of Illinois. Mr. Castaneda’s leadership position in the field of workers’ compensation includes serving as past president – and first Hispanic president – of the Workers’ Compensation Lawyers Association. He also served as a director of the association, and is currently editor of the organization’s newsletter. Mr. Castaneda is a member of the Illinois State Bar Association and the Illinois Trial Lawyers Association. He has been selected as an Illinois Super Lawyer, described by the publisher as “a listing of outstanding lawyers from more than 70 practice areas who have attained a high degree of peer recognition and professional achievement.”

As of 2010, Mr. Castaneda has been listed in Best Lawyers in America, "the oldest and most respected peer-review publication in the legal profession." In addition, Martindale-Hubbell, “the authoritative resource for information on the worldwide legal profession,” has rated Mr. Castaneda AV® (very high to preeminent) for both legal ability and professional ethics. Mr. Castaneda received his Bachelor of Arts undergraduate degree from Loyola University of Illinois, and his Juris Doctorate from the University of Minnesota, where he also served on the editorial staff of the Law and Inequality Journal. He was admitted to the Illinois bar in 1987 and to the U.S. Supreme Court in 1995. Mr. Castaneda has lectured for the Illinois State Bar Association on “Worker’s Compensation Basics”; lectured on “Repetitive Carpal Tunnel Syndrome under recent legislative changes” for judicial training of the Arbitrators and Commissioners; and most recently lectured on “Litigation Techniques for the Difficult Workers’ Compensation Cases” for NBI™.