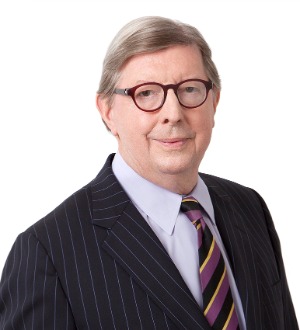 John Briggs is regarded as one of the most accomplished competition lawyers of his generation. For more than 40 years, Mr Briggs has been the competition and litigation counsel of choice for many major companies in the United States and abroad. He is co-chair of Axinn’s antitrust and competition group, managing partner of the firm’s Washington, DC office and was chair of the Section of Antitrust Law of the American Bar Association (1995–96) as well as chairman of the then-largest private antitrust practice in the world (1995–2005).

His practice is focused on antitrust (private treble damage actions, transactions and cartel work,) and other complex civil litigation (parent/shareholder liability, business torts and contracts). He also has considerable experience representing companies dealing with competition issues, including litigation, implicating the use or misuse of intellectual property.

He has handled sensitive cartel matters for US firms, European firms, Mexican firms and Asian firms in the US as well as in Europe, achieving agreeable outcomes for clients.

n contested litigation matters he has been lead counsel in the federal or state trial courts of more than 20 states and has been lead counsel on appellate matters in the Supreme Court and in the Second, Third, Fourth, Fifth, Sixth, Ninth, Eleventh, and Federal Circuits, as well as various State appellate courts. He has handled such matters for a wide variety of companies, including: the Affinia Group, Black & Decker, Caterpillar, Checkpoint, Dana, Danfoss, Electrocom, Fairchild Aircraft, Fairchild industries, Hexcel, Independence Blue Cross, Ingram Micro, Louisiana Blue Cross, Merck, Tomkins, McCulloch, Prudential Re, Quantum, Rockwell, Uniroyal, Uniroyal Chemical and USAir among others. From 2001 to 2007, he divided his time between Brussels and Washington, DC, and has handled cartel matters both before the EC and the US Department of Justice.

In mergers, he has considerable trial and regulatory experience, having represented one or both merging parties in fully litigated successful merger cases against both the FTC and the DOJ. He was engaged as special trial counsel by the Comptroller of the Currency to intervene and defend at trial a bank merger approved by the Comptroller and unsuccessfully challenged by the DOJ. And he has shepherded through the FTC/DOJ and foreign review process dozens of substantial transitions on behalf of a majority of the companies mentioned above plus others, many involving the successful management of "second requests". He also successfully opposed the combination of GE and Honeywell before the European Commission on behalf of a major US company.

Mr Briggs has been engaged as a testifying expert witness on US antitrust law at the behest of companies and law firms in proceedings around the world, including Australia, Canada, Switzerland, the United Kingdom and the United States and he has been a frequent commentator on matters of antitrust law and policy on NPR, CNBC, CNN and for the Wall Street Journal, the Financial Times, Reuters and other media outlets.