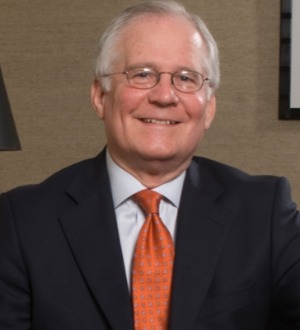 Years In Practice
Phone Number (225) 387-3221
Practicing law since 1974, Taylor Porter Of Counsel Jim Ellis has focused on representing utility, energy, and other regulated companies on state and federal regulatory, corporate, merger and acquisitions, transactional, contract, and litigation matters. Upon graduating from Tulane Law School, he worked in Washington, D.C., for the Federal Energy Regulatory Commission and the General Services Administration. He represented the executive agencies of the federal government and the Department of Defense in state and federal regulatory proceedings involving electric, gas, and telecommunications matters. In addition to appearing before the Federal Energy Regulatory Commission, he appeared in regulatory proceedings before one-fourth of the state public service commissions in the United States. Since joining Taylor Porter in 1978, he has represented electric, water, and gas utility companies, and numerous pipeline and energy companies before state regulatory agencies and the courts. As part of that representation, he advises the boards and management of those companies on corporate, rate, merger and acquisitions, contract, and litigation issues. Further, he has worked with regulated entities on franchise issues with public bodies and compliance with city and state regulatory codes. He has represented many national companies in utility, energy, cogeneration, pipeline, and other matters relating to financing, acquisitions, deal structuring, land and right-of-way acquisition, government compliance, and other corporate and litigation issues. He has been lead counsel and has litigated numerous cases at the trial and appellate levels and has won several notable cases involving regulatory law before the Louisiana Supreme Court. In addition to his representation of regulated entities and corporations, he has also represented the boards of public bodies in court and regulatory proceedings, including towns, police juries, universities, and state agencies. He also advises boards and commissions on corporate governance and directors’ and officers’ liability issues. Mr. Ellis has been selected for inclusion in The Best Lawyers in America® in Energy Law for the last 25 years. Mr. Ellis has been active in many civic and economic development organizations in the capital region. He was General Counsel for the Baton Rouge Area Chamber (2005-2007), served as Chairman of the Board of the Baton Rouge Area Chamber in 2008, and served on the Board of Directors and Executive Committee. Mr. Ellis has also served as  a member of the Board of Directors of the Greater Baton Rouge Airport Commission and served as Chairman of the Board of the Airport Commission. In addition, he served as President of the Board and board member of the City Club of Baton Rouge, FuturePAC, the Manship Theatre, the Cerebral Palsy Foundation, the McMains Children’s Developmental Center, ReStore of Baton Rouge, and Evergreen Life Services.
What legal services does this lawyer offer?
Energy Law
Contact Details and Office Locations
Office: (225) 387-3221
450 Laurel Street, Suite 800, P.O. Box 2471
Baton Rouge, Louisiana 70821
Baton Rouge, Louisiana 70821
See Location