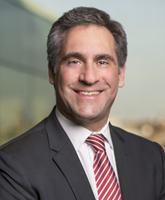 Eric Frechtel practices in the area of construction and government contracts. He represents general contractors, subcontractors, sureties, and owners, in both the prosecution and defense of claims on large public and private construction projects. He has significant litigation experience before both state and federal courts, including both bench trials and jury trials, and he has considerable experience in construction arbitration as well. Eric’s practice also includes substantial work in the preparation and prosecution of, as well as the defense against, delay and impact claims, mechanic’s liens, and surety bond claims. In addition, he has successfully mediated, negotiated, and engineered numerous complex and multi-party settlements, and he has been successful in appellate work before both state courts and federal circuits.

Eric emphasizes practical realities over the academic or theoretical. He prioritizes the goals of his clients rather than litigation for sport. In every matter, and continually during his handling of cases, Eric examines his client’s risks, costs, and potential reward, and maintains his focus on what is most important: the best interests of the client. Eric has enjoyed much success along the spectrum of disputes – from avoidance of escalation to informal settlement and mediation to arbitration and litigation.