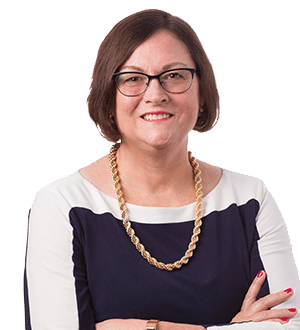 Debbie Corbishley has more than 30 years of experience litigating complex commercial cases of all types in state and federal court. She has represented clients in bet-the-company litigation involving common law and statutory business torts, contract disputes, fraud and conspiracy claims, state and federal securities law violations, fraudulent conveyances, class actions, and corporate and partnership issues. In many of these matters, she has coordinated with criminal, SEC, regulatory, bankruptcy, and tax counsel, or lawyers representing the same clients in other jurisdictions on related claims. Debbie has also represented taxpayers in federal district court actions.

Debbie has been honored to represent local and national law firms and attorneys in connection with complex malpractice claims, third party complaints, disqualification or sanctions motions, and grievances. She regularly counsels law firms on ethics issues, and advises attorneys and law firms in a preventative and risk management capacity. Among the many claims on which Debbie has represented lawyers are allegations of fraud, conspiracy, aiding and abetting a Ponzi scheme, and RICO, as well as the more common negligence or breach of fiduciary duty claims. Her clients have been sued on allegations of mistakes or intentional wrongdoing relating to transactional work, intellectual property, real estate advice or documentation, securities filings or advice, bankruptcy representation, and litigation.

She has been admitted to The Florida Bar and the following courts: the United States Court of Appeals for the Eleventh Circuit; and the United States District Courts for the Southern, Middle and Northern Districts of Florida and the District of New Jersey.

Debbie currently serves as the Intake Officer for the Episcopal Diocese of Southeast Florida for complaints against clergy. She is a life member of the Girl Scouts and was a leader for nine years.

Debbie was born in New Jersey. She earned her Bachelor of Arts with honors and her Juris Doctor, with high honors, from Rutgers University – Camden College of Arts & Sciences and School of Law – Camden respectively. She was awarded a Graduate Merit Scholarship for law school. During law school, she was a teaching assistant to torts and contracts sections, as well as an assistant for legal writing. She served as the Research Editor on the Law Review. She interned with the Honorable Dolores Sloviter, United States Circuit Judge, on the Third Circuit Court of Appeals in her final year of law school. Following graduation, Debbie taught in the legal writing program at University of Miami from 1984 to 1986. She joined Kenny Nachwalter following her first year of teaching.