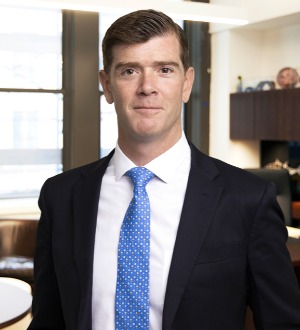 Attorney Daniel Patrick Blouin is a shareholder at Simmons Hanly Conroy in the Asbestos Litigation Department. Under his leadership as a lead trial attorney securing significant trial verdicts in courts nationwide, the firm’s product liability practice was named a 2019 “Practice Group of the Year” by Law360.Based in the firm’s New York office, Daniel has secured hundreds of millions of dollars on behalf of clients diagnosed with products-related cancers, extreme injury and asbestos-related diseases such as mesothelioma and lung cancer. In his frequent role as lead trial attorney and co-counsel, he has litigated against numerous national corporations involved in the manufacture and sale of dangerous products and equipment. He handles every aspect of the litigation process, from client intake to discovery, to motion practice through trial verdict, keeping his clients’ needs and rights foremost in his priorities.

Daniel is a skilled legal advocate for his clients and has secured impressive and continuing results for his clients. During his legal tenure, Daniel has served as the lead trial attorney in dozens of jury trials and secured nearly half a billion dollars in verdicts on behalf of individuals and families harmed by asbestos exposure. Further, Daniel has served as lead trial counsel on countless cases that have cumulatively resolved for hundreds of millions of dollars before the verdict.In 2013, Daniel obtained a $190 million verdict on behalf of five tradesmen who developed mesothelioma decades after their occupational exposure to asbestos. The verdict was the largest consolidated asbestos verdict in New York history. In addition, a $60 million individual case award to two cancer patients therein received ranked among the largest individual damages awarded in a New York asbestos case. In 2014 and 2015, Daniel had unprecedented successes at trial in Delaware, New York City and Upstate New York. He obtained excellent settlements for clients before and during the trial and won a jury verdict in a very contentious case in Syracuse, New York.In February of 2017, after trial, Daniel won an $11 million judgment for Patricia and Joseph Otten in St. Louis from a supply company and its large corporate insurer for Mr. Otten’s injuries and subsequent death, and Mrs. Otten’s loss of consortium.In August of 2017, Daniel and Shareholder James “Jim” Kramer won a hard-fought trial for nearly $5 million against a Jenkins Brothers, a valve manufacture for a Scottish immigrant who worked as a welder. Subsequent to the verdict, Daniel and Jim led a team that added millions more to the verdict through legal appellate work, in a groundbreaking legal action.In 2018, Daniel and Jim secured a $60 million verdict in New York City against boiler manufacturers A.O Smith, Burnham, LLC, and Peerless Industries, Inc. This historic verdict, secured on behalf of a former laborer, marks one of the highest verdicts for an individual with mesothelioma ever received in New York.Later in 2018, Daniel and Jim secured a $40.1 million verdict against Goodyear Tire & Rubber Co. on behalf of a U.S. war veteran and former naval boiler tender suffering from pleural mesothelioma. This verdict is considered one of the largest compensatory verdicts in New York State history.In the Spring of 2019, Daniel won a substantial verdict on behalf of a drywall worker in Cleveland, Ohio. This verdict came at the immense expense of a defendant who denied making the product at issue, a defense which Daniel and his team overcame through intense legal and factual struggle.Daniel continued his impressive verdict streak in 2019 when he, along with Shareholder Jennifer Alesio, secured a $34 million verdict in Los Angeles County against Ford Motor Co. This monumental result against one of the nation’s largest auto manufacturers was on behalf of a retired mechanic exposed to asbestos while replacing brakes at California and Indiana gas stations in the 1970s and 1980s. The verdict was ranked on the Daily Journal’s Top California Verdicts for 2019.In addition to these victories in courtrooms coast to coast, Daniel has litigated hundreds of other cases against some of the nation’s largest corporations and the scientists they hire to defend them. On a daily basis, he secures significant settlements for the firm’s clients and their families in these additional cases before a trial or a verdict is warranted.

Since 2018, Best Lawyers has ranked Daniel as one of the “Best Lawyer in America” in the area of Mass Tort Litigation/Class Action – Plaintiffs. He was also a recognized member of the National Trial Lawyers “Top 40 under 40” for 2014 and 2015. Those same years, the National Academy of Personal Injury Attorneys also named him a winner of its “Top Ten Under 40” award. He is a member of the American Bar Association and the New York Bar Association.Daniel presents and speaks to his peers, adversaries and the judiciary on vanguard issues facing the products liability field during industry conferences, including PALS. He publishes on legal topics in national legal trade journals and has been a guest on the “Great Trials” podcast regarding his legal achievements. Daniel actively mentors and recruits up and coming product liability litigators.Before becoming an asbestos attorney, Daniel served as an assistant district attorney for King’s County (Brooklyn), New York as a felony trial-attorney and a criminal-court supervisor. As a felony trial-attorney and a criminal-court supervisor, he obtained the convictions of hundreds of criminals, often as a result of verdict at trial.Daniel is admitted to practice law in New York and the federal courts of New York, with admission to the U.S. District Court in the Eastern and Southern Districts of New York. In 1999, he received a B.A. degree from Georgetown University and went on to earn his J. D. from Brooklyn Law School.