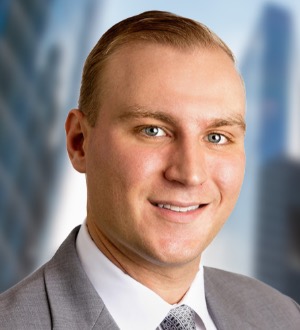 Charles R. Haskins (Chuck) concentrates his practice on medical malpractice, products liability, and premises liability litigation. Chuck has worked at Clifford Law Offices for a number of years. Starting as a clerk, his commitment to his work and dedication to the law was immediately recognized. Chuck decided to work at Clifford Law Offices because of his interest in helping the injured, those who are in their most desperate times of need, and he does so with a calm, studied manner as he approaches every task in life.

A graduate of Loyola University School of Law, Chuck already has more than a dozen trials under his belt, having second chaired complex medical malpractice cases under the tutelage of partner Keith Hebeisen.

In 2019, Chuck obtained a record $101 million verdict on behalf of a baby who sustained brain damage at birth at West Suburban Medical Center in Oak Park, Illinois. The baby was brain damaged at birth when his external fetal monitoring strips were ignored for six hours. Experts on behalf of the plaintiff testified that he would have been born a normal baby if hospital nurses and other medical personnel would have alerted doctors to the abnormalities and performed an emergency C-section. The same year, Chuck obtained an $8.5 million on behalf of a Williamson County man who died when a certified registered nurse anesthetist and hospital employees allowed the patient to become dangerously hypotensive.

In 2018, Chuck and partner Bradley M. Cosgrove tried six multi-week medical malpractice and wrongful death cases, including a $21.5 million verdict on behalf of the family of a six-year-old boy who drowned at a public swimming pool. Mr. Haskins has written extensively on complex legal issues such as Governmental Tort Immunity, and also has researched and written extensively on appellate briefs. In 2017, Chuck second-chaired a trial resulting in a $4.5 million verdict on behalf of a woman who suffered severe neck injuries when a “door-closer” fell on her head as she exited a strip-mall store. The verdict set a record in DuPage County.

Currently, Chuck is working on several complex medical malpractice and personal injury cases, preparing them for trial, including the case of the failure to diagnose and treat a brain aneurysm, a drowning death at a public high school, and an airplane crash.

Chuck spends his time in the courtroom representing the injured or their families on cases such as a $20 million settlement with Senior Partner Robert Clifford and Bradley Cosgrove on a trucking accident case; a $6.5 million settlement for the wrongful death of a 35-year-old husband and father who died as a result of the failure to timely diagnose an aortic dissection; and a woman who suffered cognitive impairment after doctors failed to diagnose and treat a pulmonary embolism – the case settled the day before closing argument.