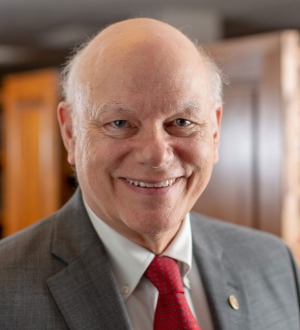 Years In Practice
Phone Number (608) 519-4788
After serving as a JAG in the United States Air Force, Chuck joined the firm in 1977, where he has practiced law for over 45 years. He concentrates his law practice in the areas of personal injury litigation, workers’ compensation, and mediation. He is an honors graduate of the University of Wisconsin law school. Chuck is recognized by his peers as a Super Lawyer and has an AV Rating from Martindale Hubbell, the highest professional rating that can be given to a lawyer.Acknowledged as an effective problem solver, Chuck‘s integrity and judgment are respected by people on both sides of an issue which makes him a valued mediator. His negotiation and litigation skills successfully serve clients injured in car and motorcycle accidents, dog bites, slips and falls, and many other injury-producing accidents. For people injured at work, Chuck brings recognized state-wide expertise in the area of Workers’ Compensation law essential to maximizing benefits for injured employees. As a founding board member and past-president of the Wisconsin Association of Workers’ Compensation Lawyers, and after hundreds of successful hearings on behalf of injured workers, Chuck has an excellent working relationship with and the respect of the Administrative Law Judges who conduct Workers’ Compensation hearings.Chuck is a past-president of the La Crosse County Bar Association. He was a founding board member and served as president of the Wisconsin Association of Workers’ Compensation Attorneys. Chuck served six years on the Board of Governors for the State Bar of Wisconsin and served as liaison to the Litigation Section.Chuck is a respected community leader who has served as the founding president of many community organizations including Freedom Honor Flight, which sends WW II Veterans to Washington, D.C. to be honored; the Riverside International Friendship Gardens, Inc., the La Crosse Associations for our sister cities in Dubna, Russia; Luoyang, China; Bantry, Ireland; and Forde, Norway. He is also the founding and current president of The Brain Game, Inc. devoted to healthy early childhood development. An active Rotarian, Chuck served as District Governor for Rotary International.
What legal services does this lawyer offer?
Workers' Compensation Law - Claimants
Education
University of Wisconsin - Madison, Juris Doctorate
Graduated 1973
Contact Details and Office Locations
Office: (608) 519-4788
Fax: (608) 784-7414
505 King Street, Suite 300
La Crosse, Wisconsin 54601
La Crosse, Wisconsin 54601
See Location