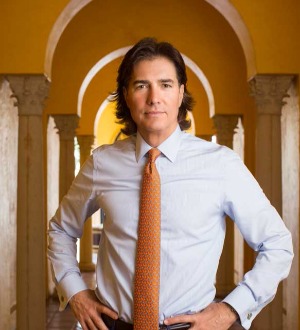 Giving Back... That is the personal mantra of Bill Bone and it’s what guides him in every aspect of his life, including his passion for cycling his service as a volunteer leader in the community and his accomplishments as one of Florida’s best known and most successful trial lawyers.

In his three decades of legal practice, Bill Bone has earned a well-deserved reputation as a staunch, courageous, and powerful advocate for those in need of a car accident lawyer or having been affected by bicycle accidents, wrongful death, medical malpractice and other personal injuries. As co-founder of the law firm of Larmoyeux & Bone with main offices in West Palm Beach and principal of Bill Bone Bike Law with affiliate offices throughout Florida, he has successfully represented over a thousand clients obtaining settlements and jury awards of more than a hundred million dollars.

Mr. Bone is admitted to practice in all the state courts of Florida and certified as a specialist in Civil Trial Law by the Florida Bar. He is past chairman of the Plaintiff’s Personal Injury Law Committee, Law Week, and the public relations committee for the Palm Beach County Bar Association.Super Lawyers has recognized him as one of the nation’s best in his field, and Martindale-Hubbell, the preeminent independent rating publication, has repeatedly awarded him and his firm the highest accolades in legal ability and ethics.

Law and Leading Attorneys: A Florida Consumers Guidebook named Mr. Bone an outstanding practitioner in the top 5% of all Florida attorneys and both Google and Avvo document his client ratings as the highest and best among his legal peer group.But a commitment to his profession is just part of the Bill Bone dedication to the public good: Every day, he lives his personal philosophy to make the community more just, equitable, and compassionate.Bill Bone serves as campaign chairman of Palm Beach County Do the Write Thing Challenge, the local chapter of a nationwide project helping middle-school students understand youth violence and forward their own creative solutions.

Bill Bone is a member of the educational advisory committee of the Kravis Center for the Performing Arts, which ensures that school children experience world-class concerts and plays regardless of their ability to pay.

More recently, he served as chairman of the Palm Beach Centennial Commission, which planned the Town’s 100th-anniversary celebration in 2011 and then helped raise over a million dollars to renovate the Town Square and restore the iconic Addison Mizner-designed seahorse fountain in the center of Palm Beach Island.

As past president of Rotary Club of West Palm Beach, Bill Bone remains an active member of this world-wide, volunteer-led, civic and charitable organization for business professionals.

Bill Bone is an enthusiastic recreational cyclist and dedicated fan of the sport as the lead sponsor of the Bill Bone Pro-Am Race Series, the Bill Bone Racing Team, Bill Bone Twilight Race Series and the Bill Bone Tropical Triathlon, which unite and support amateur cyclists and pro athletes of all ages throughout Florida.

Uniting his love for Florida’s natural beauty, his athletic spirit, and his commitment to justice, Bill Bone is also one of the state’s leading practitioners in the emerging field of bicycle law and he regularly advocates for changes in state-wide and local laws to protect cyclists.