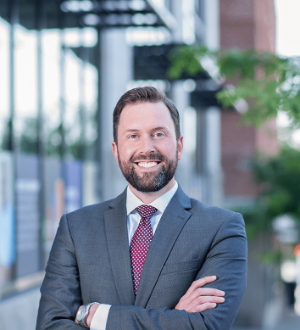 Ranked AV® Preeminent™ by Martindale-Hubbel, Adam has enjoyed a great deal of success in the courtroom.  He has litigated hundreds of cases, including more than 500 hours of trial time, defending cases involving seven and eight-figure demands, lasting anywhere from three days to seven weeks long.

Adam received a B.S. in Business Administration from Columbus State University, graduating at the top of his class, summa cum laude.  After college, Adam spent three years working as a project manager in the healthcare and software development industries before choosing to pursue a career in law.  Adam earned his Juris Doctorate from Mercer University, and after practicing law there for several years, he and his wife Lucie chose to relocate to the mountains of western North Carolina. Here in Asheville, Mr. Peoples served as a federal law clerk to the Honorable Martin Reidinger, United States District Court Judge for the Western District of North Carolina.  After his clerkship, Adam joined the Asheville office of Hall Booth Smith, P.C.

Adam is proud to call Asheville home.  He loves spending time outdoors with his family, woodworking, and all that western North Carolina has to offer, including mountain biking, rafting, and camping.