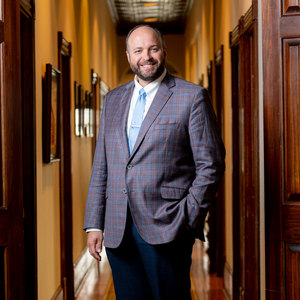 When William Messervy and his brothers would go camping with their father, he’d always make sure they left the campsite in better condition than they’d found it. At the time, the task was nothing more than an annoyance to William. He later realized, though, that his father had been teaching them a life lesson. That lesson is one that William works to incorporate into his daily life. During the seven years that he has been a practicing attorney, William has always gone the extra mile for his clients. He’s known to be intuitive and empathetic; both qualities that help him better serve them and be most responsive to their needs.

A native of Huntsville, William got his introduction to law as a runner at with our firm. In that position, he saw that our lawyers were making a positive impact on the lives of their clients. They helped people who had been injured, by no fault of their own, and got them through difficult periods in their lives. The work they did appealed to William as being highly rewarding. Not surprisingly, his own career as a personal injury attorney has been the same.

When William has time away from work, he enjoys reading, painting, woodcarving, and coaching and playing with his sons.