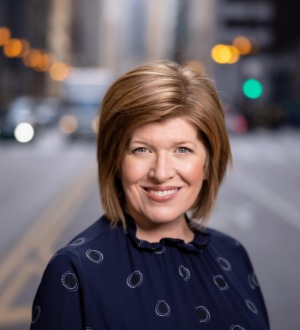 Shannon McNulty is a Chicago personal injury lawyer and wrongful death attorney who comes to Clifford Law Offices with a wealth of professional experience from previous employment. Having worked for 10 years with the administration of the Chicago Police Department, she served as the Director of Administration in the Bureau of Operational Services. In this critical she was Chief of Staff to the First Deputy Superintendent. She not only became familiar with the inner workings of this complex department; she also was instrumental in the development and implementation of administrative projects and policies. Shannon also was involved with the fact-gathering and notification of all major incidents to Department brass as well, skills which handily translate to her work as a Chicago wrongful death attorney and personal injury lawyer.

Prior to becoming a Chicago wrongful death attorney and personal injury lawyer, Shannon attended night law school at DePaul while working full-time. Shannon's determination resulted in her completing law school one year ahead of schedule. She was recognized as an outstanding student in trial advocacy and contracts, having received the CALI Award for excellence in both of these fields. She holds a Masters of Science from the School of Management of Public Services at DePaul University, which bestowed upon her the American Society of Public Administrators' Student of the Year Award. She graduated cum laude from Loyola University in Chicago.

In addition to her work as a leading Chicago personal injury lawyer and wrongful death attorney, Shannon gives back to the Chicago community. Having worked in the Albany Park neighborhood on crime and prevention efforts, which resulted in her being recognized for outstanding service by the U.N.I.T.E. civic organization, she has also devised and implemented several successful fundraising efforts, including those for families in Chicago's Bronzeville community and for the families of New York Police Officers who died in the 9/11 attacks.