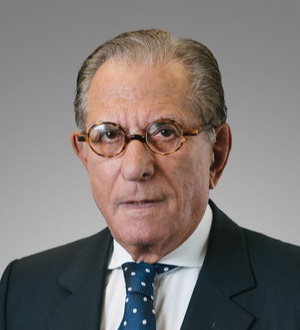 Mr. Cohen is one of the leading matrimonial lawyers in the United States.  He has been counsel in some of the most important equitable distribution and custody matters in New York.  Mr. Cohen regularly represents many of the most accomplished individuals and their spouses in the fields of finance, real estate, business, public service and entertainment.  Due to Mr. Cohen’s extensive record of accomplishment and reported decisions, he is also frequently called upon to represent individuals in significant matrimonial matters outside New York including in Connecticut, Florida, Georgia, Illinois, New Jersey, as well as internationally, in Europe and Asia.  He has lectured in the United States, Europe and Hong Kong.

While Mr. Cohen regularly appears in court and has a well-earned reputation as a skilled trial lawyer, the preponderance of his matters are settled by negotiation or mediation.  In addition to the innumerable significant matrimonial settlements that he has negotiated, Mr. Cohen has also represented countless individuals in negotiating prenuptial and post nuptial agreements.

Mr. Cohen is a sought after lecturer and author on issues relating to divorce and, since 2003, has been an Adjunct Professor of Law at the University of Pennsylvania School of Law where he teaches a course titled “Anatomy of a Divorce.”  In 2019 he was formally honored on the walls of Penn Law School for his continuing support of students, faculty and staff.

He is the author of the “anti-divorce book,” Reconcilable Differences published by Simon & Schuster.  Mr. Cohen has also been recognized by The New York Times as one of the most important divorce lawyers in the United States and he has been profiled by both The New York Times and the Wall Street Journal.

In 2016, Governor Cuomo named Mr. Cohen Chairperson of the Judicial Screening Committee and for the First Judicial Department, and also designated him as a member of the State Judicial Screening Committee.  Mr. Cohen has been a member of the Judicial Screening Committee since his 2012 appointment by Governor Cuomo and in 2016, was also appointed by Judge Peter H. Moulton, Administrative Judge of the Supreme Court, New York County, as Chairperson of the Court’s Matrimonial Committee.  In 2018, Mr. Cohen was reappointed by Judge Deborah H. Kaplan who succeeds Judge Moulton as Administrative Judge.  In that same year he was appointed by Justice Alan Scheinkman as a Special Master in the Alternative Dispute Resolution Pilot Program in the Second Judicial Department. In 2019, Mr. Cohen was appointed by the Appellate Division, First Department to serve on the Attorney Grievance Committee which investigates, reviews and prosecutes complaints of attorney misconduct.

Mr. Cohen lives with his wife in New York City and has four adult children.  He has completed seven marathons and was an officer in the Judge Advocate General’s Corps.