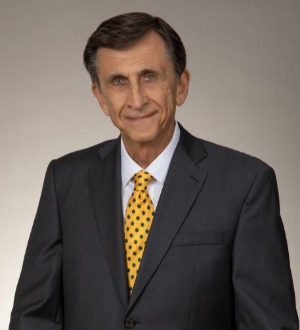 Robert J. David was born in New Roads, Louisiana on August 10, 1943.  He graduated from St. Joseph's High School and attended LSU and SLU, earning a B.A. degree in 1966.  IN 1969 he received his Juris Doctor degree from Loyola Law School, where he served on the Loyola Law Review.

Representing patients and their families in medical malpractice cases is the principal focus of Robert’s practice. He has been named to Woodward/White’s "The Best Lawyers in America," for twenty consecutive years. He has since 1989 been the editor of the continuing column on "Professional Liability" for the Louisiana Bar Journal, the official publication of the Louisiana State Bar Association.

He was Chair of the Jurisprudence Committee of the New Orleans Bar Association and received its Outstanding Service Award in 1995.  Robert served on the Ad Hoc Committee on Breast Cancer for the New Orleans Bar Association and was Chairperson of the Medical Malpractice Section of Louisiana Association for Justice.  He was a member of the "Governor's Commission on Medical Professional Liability."  He is listed in "Louisiana Super Lawyers," published by "Law and Politics," in the specialty of medical malpractice and was named by Super Lawyers as one of the "Top Ten Attorneys in Louisiana."  He has, for many years, been listed in Who's Who in America and Who's Who in American Law.  The National Trial Lawyers listed Robert in its "Top 100 Trial Lawyers."

On November 19, 2009, Robert was bestowed with the New Orleans Bar Association's Arceneaux Professionalism Award and he was presented with the President's Award from the Louisiana Association for Justice.

Robert was a reader/recorder for the Louisiana Blind and Handicapped.  He has made guest appearances on television and radio regarding issues of medical malpractice and breast cancer.  From 1995-2000 he was on Holy Cross High School's Board of Directors, and he served as President of Arden Cahill Academy’s Parent Teacher League from 1978-1979.

Robert and Stella were married in January 1967, and they have two sons.  Robert, Jr. is an attorney practicing in the Juneau David firm, Lafayette, Louisiana, and Richard is a representative of the Structural Heart Division of Medtronics in Little Rock, Arkansas.