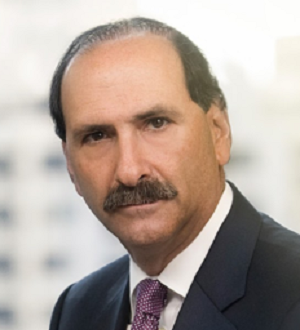 A partner at Levy Konigsberg LLP Robert I. Komitor serves as lead trial lawyer specializing in products liability, negligence, and personal injury cases involving mesothelioma, hazardous wastes, and pollution. Bob has been and continues to be named one of the nation’s Best Lawyers, in the area of mass torts, in Gregory W. Smith and Steven W. Naifeh’s The Best Lawyers in America 2005-present (Woodward/White).

Bob has consistently won some of the highest damage awards in the nation. For three consecutive years, he made The National Law Journal’s list of lawyers winning the highest verdicts.

He was trial lawyer on the “New York Powerhouse” mesothelioma cases and the consolidated Brooklyn Navy Yard litigation, which resulted in the largest mesothelioma compensation awards in the country for 1991 and 1992, according to The National Law Journal.

In 1993, Bob served as co-trial lawyer with LK partner Moshe Maimon on a case that resulted in New York State’s largest mesothelioma compensation – one of the largest in the nation for that year. He repeated this feat by obtaining two of New York State’s highest compensatory verdicts for mesothelioma in 1996 and, again, in 2003.

Bob earned a Master’s Degree in Marine Environmental Sciences from Stony Brook University’s Marine Sciences Research Center. He earned a law degree from the Hofstra University School of Law, where he was an editor at the Hofstra Law Review.Bob is a former member of the Products Liability Committee of the New York City Bar Association and has co-chaired the New York State Bar Association’s Civil Litigation Committee on Environmental Law. He has also served as chairman of the G-I Holding’s Bankruptcy Creditors’ Committee and serves on the Trust Advisory Committee on the Ray Tech and G-I Holding’s Trust.