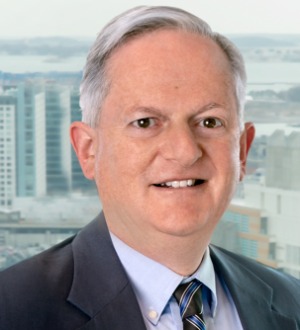 Recognized by Best Lawyers® since 2007.
600 Atlantic Avenue Boston, Massachusetts 02210
(617) 482-7211
|
Firm: Krokidas & Bluestein LLP
|  Website
Edit Profile
Edit Your Profile
To edit your Lawyer Directory information, please login to your
Best Lawyers® Admin Account.
If you have any questions or need assistance, please contact us at info@bestlawyers.com or 803.648.0300.
Overview
Firm

Paul’s litigation practice is comprised of a mix of trial work and alternative dispute resolution in employment law, sexual harassment, wage and hour, civil rights, commercial and partnership disputes.  He also maintains an active practice as a mediator and arbitrator.

Other practice areas include contract, commercial and partnership disputes, claims under the Fair Housing Act and the Americans with Disabilities Act, as well as public accommodation claims. On behalf of organizations operating group homes for disabled individuals, and substance abuse programs, he has successfully challenged a variety of neighborhood and municipal obstacles to the siting and operation of such programs, invoking the Dover Amendment and civil rights laws.

Paul has served as special counsel in the investigation of numerous harassment matters. He also consults with attorneys and litigants on the availability of insurance coverage for employment and civil rights claims.

Building on his decades of experience as an advocate, he serves as a mediator in employment and other disputes for the American Arbitration Association and through a private mediation practice. Paul has successfully resolved about two hundred cases involving claims of discrimination, employee misclassification, overtime disputes, non-payment of wages and commissions, failure to accommodate disabilities, non-competition agreements, contract and partnership disputes, as well as commercial cases.

As a member of the American Arbitration Association’s National Panel of Employment Arbitrators, Paul serves as an arbitrator on a wide variety of employment disputes. He has handled matters ranging from wage and hour class actions to individual cases involving claims of sexual harassment, breach of contract and disability discrimination.

Paul advises employers in the prevention of discrimination and sexual harassment in the workplace. He has developed personnel policies and training programs aimed at both preventing and properly handling harassment and discrimination complaints for a wide range of public, non-profit and for-profit institutions. He has also conducted audits to identify areas for improvement in human resource practices. Finally, he has advised employers on best practices to promote gender and racial equity, including the design of workplace climate surveys and affirmative action programs.

Among his public service activities, Paul served on the Board of Editors of the Boston Bar Journal and as Co-Chair of the Labor & Employment Section of the Boston Bar Association. He filed an amicus curiae brief in the landmark marriage equality case of Goodridge vs. Department of Public Health, where he argued on behalf of a coalition of national civil rights organizations.

He served as an Adviser to the American Law Institute (ALI) on the 2015 inaugural Restatement of Employment Law. He has published a number of articles on employment law for Massachusetts Lawyers Weekly and other publications and is frequently quoted in articles on workplace issues.

In 2019, he chaired panel presentations on employment law at the Judicial Retreat and Bench-Bar Conference of the United States District Court for the District of Massachusetts.  He is also the co-author of "Availability of Insurance Coverage for Employment Claims" in the Massachusetts Continuing Legal Education (MCLE) treatise entitled "Massachusetts Employment Law."