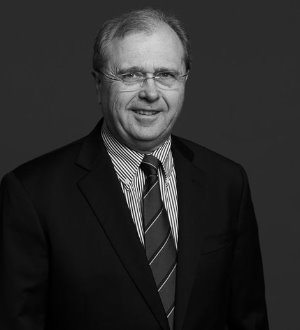 Michael F. Brockmeyer is a partner in the Washington, D.C. office of Haug Partners. His practice concentrates on antitrust and consumer protection law. He spends substantial time on antitrust litigation, governmental investigations, and counseling a wide array of clients on mergers and acquisitions, joint ventures, distribution, pharmaceuticals, electronics, health care, insurance. Mr. Brockmeyer is a leading U.S. antitrust practitioner in matters involving the pharmaceutical industry, including litigation, giving advice on the application of the antitrust laws to settlements of pharmaceutical patent cases and intellectual property licensing agreements, and defending governmental investigations.

Prior to entering private practice, Mr. Brockmeyer served as chair of the Multistate Antitrust Task Force of the National Association of Attorneys General and was a chief of Maryland’s Antitrust Division. He has served as a member of the Executive Working Group for Antitrust consisting of representatives from the Department of Justice, Federal Trade Commission, and State Attorneys General.

Mr. Brockmeyer lectures and publishes frequently on antitrust topics. Active in the American Bar Association’s Antitrust Section, he has served as a member of the Section Council for several years, and has been involved in Section activities throughout his professional career. He served on the Antitrust Section’s 1989 Special Committee to study the role of the Federal Trade Commission. He was a member of the Section’s 1993 Special Task Force on Competition Policy. From 1991 until 2016, he served on the Advisory Board of the Antitrust and Trade Regulation Report of the Bureau of National Affairs.

Since 1999, Mr. Brockmeyer has been an adjunct professor at the University of Maryland School of Law teaching Antitrust Law.

From 2004 until 2010 and starting again in 2016, Mr. Brockmeyer has been a member of the School Board of Archbishop Curley High School in Baltimore, Maryland.