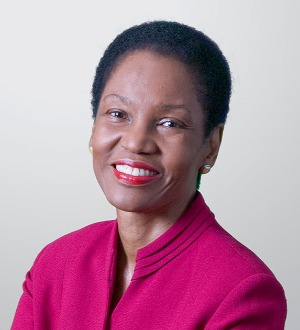 Ms. Holifield practices employment law and was named by Black Enterprise Magazine as one of America’s top employment lawyers. Ms. Holifield was also named one of South Florida’s 25 most successful and prominent black business women by Network Miami magazine.

For five years, Ms. Holifield was an assistant counsel at the NAACP Legal Defense and Educational Fund in New York City, where she was responsible for litigating class action employment and prison reform lawsuits before federal trial and appellate courts in Florida, Georgia, Alabama, Texas, Illinois and New York. She was the General Counsel for the New York State Division for Youth and a law clerk for Judge Paul H. Roney of the United States (former) Fifth Circuit Court of Appeals.

When Ms. Holifield was named the 2000 Chesterfield Smith Lawyer, she received the outstanding lawyer of the year award, the highest honor the firm awards to a lawyer.

Ms. Holifield has served on the Directors Committee of Holland & Knight and the Board of Managers of Swarthmore College. She has also served as a member of the House of Delegates of the American Bar Association, and Executive Council of Florida Bar Labor and Employment Section.

Ms. Holifield served two terms as chairperson of the ABA Conference of Minority Partners in Majority/Corporate Law Firms and as a member of the ABA Commission on Opportunities for Minorities in the Profession. The Governor of Florida appointed Ms. Holifield as a co-chair of the 1994 Summit of the Americas, which included historic meetings of the Heads of State of 34 countries in this hemisphere.