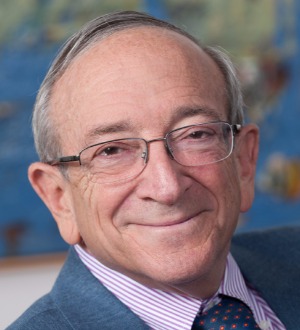 Business owners, real estate professionals, non-profit associations, leaders of educational communities and other organizations turn to Lawrence A. Shulman when they need not just a lawyer, but someone who can create consensus, drive change, and solve complicated problems that involve multiple stakeholders.

Larry is the founding partner of Shulman Rogers. He is a nationally recognized commercial real estate and leasing specialist, lecturer and a fellow of the American College of Real Estate Lawyers.

Sought out and hired time and time again for many reasons, Larry is renowned when it comes to crafting compromise, building consensus, and forming communities – even among adversaries.

He has gained a reputation as a masterful negotiator, an artful persuader and a civic-minded lawyer who is not afraid to take chances. He has been referred to as a “political bridge-builder,” a “trail blazer,” and a “catalytic force of change.”  He knows how to navigate contentious political environments and highly bureaucratic systems.

As a gifted listener with deep compassion for all stakeholders, Larry not only solves problems creatively, but in a manner that often creates new and once unforeseeable opportunities. He is an innovative problem-solver known for bringing solutions to the table, not just more talk about the problem itself.

As a result of the success he has achieved for others, he is a man of stature in the community. He is highly-respected by his peers, adversaries, judges, business executives and government leaders and has been recognized for his many achievements.

According to Chambers USA, the leading independent ranking organization for commercial lawyers, “Lawrence Shulman is ‘very well known in the community’ and remains a key resource for commercial real estate leasing matters.”

Larry served as the Court-appointed mediator, who assisted in promoting discussion and settlement among the parties in Vaughns, et al. v. Board of Education of Prince George's County, et al., a 30-year old school desegregation case. The Court acknowledged in its opinion "the extraordinary role Mr. Shulman played in helping to bring the settlement about."

Larry has invested his creativity and vision in identifying and meeting the needs of the community, especially in the area of education. His leadership and stewardship of creative and innovative community projects have won him acclaim both nationally and locally.

Since 1975, Larry has helped to found five separate, non-profit education foundations to involve various segments of the business community in the Montgomery County Public Schools (MCPS). In each of these endeavors, Larry took the lead and recruited 10-20 business leaders to volunteer in each of the foundations. The foundations include: the Montgomery County Students Construction Trades Foundation, Inc. (Founded in 1976, this project received an award in 1981 from the Secretary of the U.S. Department of Education as one of the ten outstanding vocational education programs in the nation.); the Montgomery County Students Automotive Trades Foundation, Inc. (Founded in 1977, a separate but related foundation that supports education in automotive trades by providing the framework, financing, used automobiles, marketing and consultative services for students to operate several "Mini-Dealerships" that recondition and sell used automobiles, the first such project in the nation.)

As chairman of the Governor's Task Force on Procurement, Larry led a state-wide task force established to eliminate red tape and make the state's procurement process more effective. The task force created plans to inject flexibility and common sense into procurement practices and recommended reforms to assist small businesses and MBE firms in procurement dealings with the state.

Larry was the Subcommittee Chair of the Public/Private Partnerships Subcommittee of the Governor/Speaker's Task Force on Education Funding Equity, Accountability and Partnerships. This was a task force designed to review education funding, program accountability, and public/private partnerships between Maryland schools and the private sector.

Larry was also the Vice Chair of the Horizon 21 Information Technology Strategic Planning Steering Committee. This committee was a Montgomery County government and private sector partnership set up to facilitate the development of a strategic plan for information technology for the county government.

In addition to his law practice and community service career, Larry has lectured and written for The Maryland Institute for Continuing Professional Education of Lawyers, and the American Bar Association, and has co-chaired for over 30 years the Georgetown University Law Center's Continuing Legal Education's Advanced Commercial Leasing Institute and its predecessor programs.