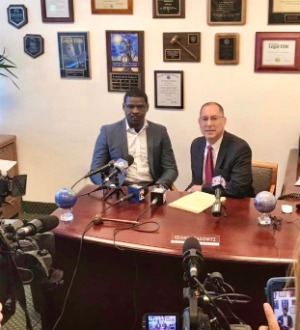 Kenneth Padowitz is a former Homicide Prosecutor with the Broward County State Attorneys Office for 16 years and a practicing Trial Lawyer for 32 years.  Throughout his career, Ken has tried over 300 jury trials and 35-First Degree Murder Trials. He has a Resume on paper and experience unmatched by most other Criminal Defense Attorney's in the Southeastern United States. Kenneth Padowitz has been an Adjunct Law Professor at Nova Southeastern Law School for 17 years teaching courses in Trial Advocacy and Scientific Evidence. Broward criminal lawyer, Ken Padowitz, has been featured in the media and on national T.V. hundreds of times as a legal commentator; he has also lectured extensively on various legal topics throughout Florida and the United States.

Kenneth Padowitz has been an Adjunct Law Professor at Nova Southeastern Law School for 17 years teaching courses in Trial Advocacy and Scientific Evidence. Ken Padowitz, is honored to have earned an AV® Preeminent Rating issued by Martindale-Hubbell, for ten years in a row, the leading independent attorney rating entity. An AV® Rating is the highest rating possible and signifies that the lawyer has reached the heights of professional excellence. Specifically defined: an A rating indicates “Very High To Preeminent Legal Ability”, and a V rating indicates “Very High General Ethical Standards”.The National Trial Lawyers awarded Kenneth Padowitz Top 100 Trial Lawyers.  Membership is extended solely to the select few of the most qualified, premier attorneys from each state, who meet stringent qualifications and who demonstrate superior qualifications of leadership, reputation, influence, stature and public profile.

Super Lawyers has awarded Broward criminal lawyer, Kenneth Padowitz, recognition and inclusion in Super Lawyers. Super Lawyers is a rating service of outstanding lawyers who have attained a high-degree of peer recognition and professional achievement. The selection process includes independent research, peer nominations and peer evaluations. Only 5% of Attorney’s in the State are selected to Super Lawyers.An Avvo “superb” rating of 10.0 was awarded to Kenneth Padowitz for his legal expertise. He was also awarded a Client’s Choice Award by AVVO.Legal Leaders – South Florida’s Top Rated Lawyers – A Definitive Guide to Legal Representation in South Florida – recognized Broward Criminal Defense lawyer, Kenneth Padowitz, as a Top Rated Lawyer. Florida Trend’s “Legal Elite” status was awarded to Kenneth Padowitz as recognized by his peers.Who’s Who in America included Kenneth Padowitz in the special 70th Platinum Anniversary Edition of Who’s Who in America for 2016, distinguishing him as one of the leading achievers from around the country. Additionally, Ken was awarded the Marquis Who’s Who – Lifetime Achievement Award in 2018.

As an Assistant State Attorney in the Homicide Unit, Kenneth Padowitz prosecuted many high-profile trials, which include the case against Lionel Tate, a 12 year old indicted by a grand jury as an adult in the murder of a 6-year-old girl, Tiffany Eunich. The defendant blamed professional wrestling for the child’s death. The jury convicted him of 1st degree murder. Another one of those high profile trials include the case against Kenneth Pierce, convicted of the hit and run death of little Nicole Rae Walker. Pierce drove off the road on a Dania street and drove into a group of five children. A two-month manhunt led to the widely publicized trial and conviction of the defendant. A computer animation reenactment of the crime was introduced into evidence at trial, by Padowitz, for the first time in a Florida courtroom. The appellate court upheld this visual evidence in a written opinion – the first case law in the United States to allow the use of animation in a criminal trial.

Broward criminal attorney, Kenneth Padowitz, was an Adjunct Professor at Nova Southeastern University Law Center for 17 years and has taught and lectured extensively in the areas of trial advocacy, scientific evidence and trial exhibits. He was also a Faculty Instructor for:The National Institute of Trial Advocacy, Florida Prosecuting Attorneys Association, University of Florida Law School Prosecutor/Public Defender course, Institute of Police Technology and Management, and The National Student Leadership Conference at American University in Washington D.C. and Stanford University in California. Ken was the Director of the Pre-Law program at American Heritage High School where he taught students five days a week before going to court. Padowitz previously sat as Chairman of a Grievance Committee for the Florida Bar, which handles matters of attorney misconduct and discipline.

The first admission of Computer Animation as evidence in a criminal trial in the state of Florida. A forensic computer generated reconstruction of a hit and run collision of five children was created as demonstrative evidence for courtroom presentation during jury trial. Procedures were developed and strategies implemented to insure admission into evidence of this new technology. My work was ratified in the first written appellate decision in a criminal case in the United States that upheld computer animation as evidence. State v. Kenneth Pierce, 718 So.2d 806 (4 DCA 1997).