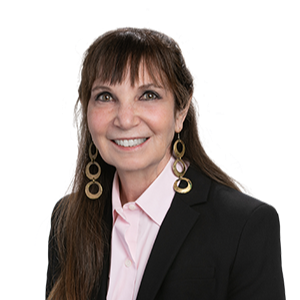 Kathi Sandweiss, a former award-winning television journalist, now enjoys a combined arbitration and appellate practice. She is a partner at Jaburg & Wilk, P.C., where she has practiced law over 30 years. Since 2016, Kathi has been an active commercial arbitrator on the roster of the American Arbitration Association. Her AAA cases have included complex asbestos trust claims, franchise agreements, service agreements, landlord/tenant disputes, emergency injunctive relief in a cannabis dispute and multiple consumer claims. She served as sole arbiter on a complex commercial case, with over $1.4 million in dispute, involving issues of breach of contract, UCC and agriculture law. She is currently chair of a three-arbitrator panel in a complex multi-state arbitration. In her capacity as an AAA neutral, she has addressed various procedural issues, including arbitrability, attorney disqualification, jurisdiction and discovery disputes.

She is on the Alternative Dispute Resolution Executive Council, State Bar of Arizona. She presented a seminar on arbitrability at the 2021 State Bar Convention and has written on the issue of delegation clauses in arbitration agreements – “Putting the Shine on Schein.”