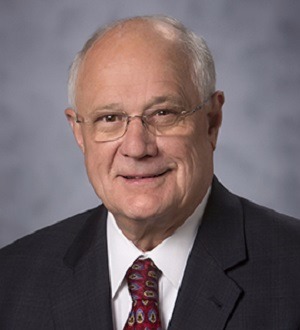 John Woolf has spent thirty-eight years successfully trying lawsuits in state and federal courts in Wichita, the state of Kansas, and neighboring states. Mr. Woolf is lead trial counsel, specializing in defending high exposure personal injury and product liability jury trials. Mr. Woolf has extensive litigation experience in complex business and commercial matters, frequently representing both plaintiffs and defendants. He has handled many complex domestic matters, many of which were resolved without the necessity of a trial.

Mr. Woolf’s practice includes consultation on litigation problem solving and avoidance, and alternate dispute resolution. He has served as a civil mediator since his selection by the United States District Court for Kansas in 1985. Mr. Woolf enjoys Martindale Hubbell Law Directory’s highest “AV” rating for lawyers and has been selected by his peers for inclusion in Best Lawyers of America in business and commercial litigation and Bet-The-Company. He has also been selected for inclusion in “Missouri and Kansas Super Lawyers” for commercial litigation.