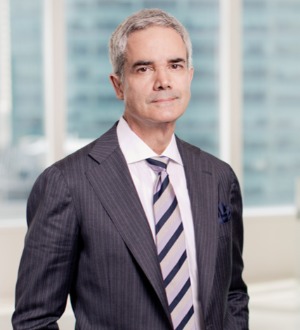 John J. Rapisardi, Chair of the Firm’s Global Restructuring Practice, has 35 years of domestic and international debtor and creditor restructuring experience across a variety of industries, including automotive, chemical, environmental, health care, energy, gaming, retail, real estate, municipal, satellite, sports franchises, textile and telecommunications. John is leading O’Melveny’s ongoing representation of the Government of Puerto Rico with respect to all aspects of the financial restructuring of Puerto Rico’s debt obligations.

Consistently recognized  as one of the leading restructuring lawyers in the US, Chambers USA has recently described John as a “tremendous lawyer” who is “well regarded in the industry” and praises his approach to both company and creditor-side transactions as “very measured, smart, diligent and thoughtful.” For his representation of the US Treasury Department in the Chrysler, General Motors and Delphi restructuring, Chambers USA described John as a “go-to attorney on behalf of the US Treasury.”

This past year he received the “Distinguished Leader” award from New York Law Journal.  Similarly US Legal 500 has continually named John among their Elite Leading Lawyers and noted that he is “a superb tactician,” “a first rate restructuring lawyer - he combines knowledge of the law with the correct demeanor necessary to press his client’s agenda without allowing his ego to interfere with success,” and a “very smart, strategic thinker.”  He was recently named in Who’s Who Legal: Thought Leaders - Restructuring & Insolvency 2018, noting “he is reputed as one of the best in the business.” The Best Lawyers in America also has continually selected John as a leading lawyer in Bankruptcy and Creditor-Debtor Rights, Insolvency and Reorganization, Bankruptcy Litigation. John is a member of the American College of Bankruptcy (ACB), an honorary professional and educational association of tenured and highly regarded bankruptcy and insolvency professionals.

John has written extensively on the subject of lender rights and remedies under the new Chinese Bankruptcy Code. John is co-author of The PRC Enterprise Bankruptcy Law: The People’s Work in Progress (Beard Group, Inc., 2008) and for the past eighteen years, has been a regular bankruptcy columnist for the New York Law Journal. John has also written and lectured extensively on the key aspects of the Brazilian bankruptcy code and its impact on U.S. investors.