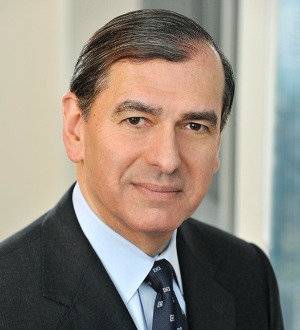 Jeffrey A. Mishkin joined the New York office of Skadden, Arps on January 1, 2000, after serving as executive vice president and chief legal officer of the National Basketball Association for seven years. His practice centers on all aspects of sports law and includes antitrust, intellectual property, labor and a wide range of trial and appellate business litigation. For many years, he has represented the NBA as its chief outside counsel.

Mr. Mishkin has participated in every major legal decision that has affected the NBA in the past 35 years — first as an associate and then a partner in private practice with a large New York firm, and later as the head of the NBA’s in-house legal department. He has been involved in every round of collective bargaining negotiations between the NBA and the NBA Players Association, and he directed the NBA’s legal effort in its 1998-1999 labor dispute with NBA players.

As executive vice president and chief legal officer, Mr. Mishkin oversaw every aspect of the NBA’s legal affairs, including all litigation, labor relations, commercial transactions, legislation, enforcement of the league’s intellectual property rights and its anti-drug program, personally trying and arguing the NBA’s most important cases, including NBA v. Williams (an antitrust and labor law case regarding the NBA’s salary cap); Chicago Professional Sports and WGN v. NBA (an antitrust case involving the league’s national television rights); and NBA v. Motorola (an intellectual property case closely watched across the country concerning the unauthorized transmission via pagers and the Internet of real-time scores and statistics of NBA games).

Mr. Mishkin was named a “Litigator of the Week” by The Am Law Litigation Daily (Sept. 19, 2013) for his work on behalf of the four major U.S. professional sports leagues and the National Collegiate Athletic Association, in securing an affirmance by the U.S. Court of Appeals for the Third Circuit of a permanent injunction preventing the state of New Jersey from authorizing gambling on the leagues’ athletic events.

He also serves as an arbitrator for the Court of Arbitration for Sport headquartered in Lausanne, Switzerland.

Mr. Mishkin repeatedly has been listed in Chambers USA: America’s Leading Lawyers for Business and The Best Lawyers in America for sports law. He was named as one of the “Most Highly Regarded Individuals” by The International Who’s Who of Sports & Entertainment Lawyers 2013 and he was included in Lawdragon 500 Leading Lawyers in America 2014. Mr. Mishkin also was named Best Lawyers’ “2012 New York City Sports Law Lawyer of the Year.”

What legal services does this lawyer offer?
Sports Law
Awards