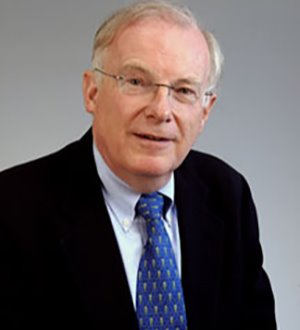 Recognized by Best Lawyers® since 2006.
2507 Post Road Southport, Connecticut 06890
(203) 319-7100
|
Firm: Brody Wilkinson PC
|  Website
Edit Profile
Edit Your Profile
To edit your Lawyer Directory information, please login to your
Best Lawyers® Admin Account.
If you have any questions or need assistance, please contact us at info@bestlawyers.com or 803.648.0300.
Overview
Firm

JAMES E. RICE is a principal of Brody Wilkinson and is a member of the firm’s Business Group. Mr. Rice practices in the areas of utilities and energy, business and finance, and administrative law. He represents energy companies and other clients before the Connecticut Public Utilities Control Authority and the Connecticut Siting Council. Mr. Rice has acted as Connecticut counsel in connection with the acquisition of major power plants and of regulated public service companies. He also serves as outside general counsel to several small- and medium-sized businesses in the Fairfield County area. Prior to joining Brody Wilkinson, Mr. Rice was a partner at the former Southport law firm of Marsh, Day & Calhoun. He is a Martindale-Hubbell AV-rated attorney.

Mr. Rice is admitted to practice in Connecticut, Michigan, the U.S. District Court for the District of Connecticut, and the U.S. Court of Appeals for the Second Circuit. He is a member of the American, Connecticut and Greater Bridgeport Bar Associations. He served as a director of the Greater Bridgeport Bar Association and as a member of the Executive Committee of the Public Utility Law Section of the Connecticut Bar Association, for which he also served as chairman. Mr. Rice has been selected for inclusion in The Best Lawyers in America© in the field of energy law since 2006. He received his B.S. from Fordham University in 1965 and his J.D. from the University of Michigan Law School in 1968.

Mr. Rice is a member and past president of the Bridgeport Kiwanis Club, and served as president of the Fairfield Beach Club. He presently serves as a director and secretary of the U.S. board of Centesimus Annus Pro Pontifice, a Vatican-based organization of lay business and professional leaders. Mr. Rice also served as president of Catholic Charities of Fairfield County. In recognition of his work for Catholic Charities, he was named a Knight of St. Gregory the Great by Pope John Paul II. Mr. Rice has also served on the Advisory Board of the Gallery of Contemporary Art at Sacred Heart University, the Board of Directors of the Fairfield County Children’s Choir, the Board of Directors of the Fairfield County Chorale, and the Institutional Review Board and Clinical Ethics Committee of St. Vincent’s Medical Center.