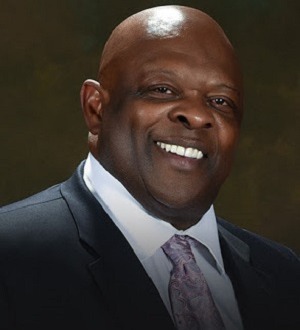 Hezekiah is also Chairman of the National Firm's Board of Partners and the Managing Partner of the Firm's Atlanta Office. He has tried over 100 cases to verdict. Hezekiah and his trial teams have attained verdicts and settlements on behalf of injury victims and consumers in excess of $1Billion.

Hezekiah has authored and lectured on medical professional liability issues, complex litigation matters, including class action and mass tort litigation, and has conducted risk management and risk assessment seminars for various clients. In addition to his trial experience, lecturing and advising clients, Hezekiah has also served as a mediator in hundreds of matters.

The National Bar Association honored Mr. Sistrunk with the Maynard H. Jackson, Jr. Legacy Award during the annual convention in July 2014. The award is presented to an honoree for empowering the future and providing leadership of our communities as did the late Honorable Maynard H. Jackson, Jr. Jackson was Atlanta Georgia's first African-American Mayor, serving three (3) terms (1974-1982 and 1990-1994). Jackson was credited for working to improve race relations and providing leadership in developing major public-works projects in Atlanta, including the renovation of the Hartsfield Atlanta International Airport, which was renamed the Hartsfield-Jackson Atlanta International Airport following Jackson's death in 2003. The National Bar Association, founded in 1925, is the nation's oldest and largest association of African-American lawyers, judges and law students, with a network of more than 59,000 professionals.

Mr. Sistrunk was selected by his peers for inclusion in The Best Lawyers in America 2015 for his work in the area of Personal Injury Litigation-Plaintiffs and in the 2016, 2017, 2018 and 2019 editions for his work in the areas of Personal Injury Litigation-Plaintiffs and Products Liability Litigation-Plaintiffs. He was also recognized as the 2019 "Lawyer of the Year" award recipient for his work in Product Liability Litigation - Plaintiffs in Atlanta. Only a single lawyer in each practice area and community is honored with a "Lawyer of the Year" award. Since it was first published in 1983, Best Lawyers® has become universally regarded as a definitive guide to legal excellence. To compile the current 21st edition of the annual publication Best Lawyers conducted an exhaustive peer-reviewed survey. Over 52,000 leading attorneys cast more than 5.5 million votes on the legal abilities of other lawyers in their practice areas. Nominees were reviewed on the basis of professional expertise and underwent a confirmation process to make sure they were in good standing with their local Bar Associations.

In April 2015, Mr. Sistrunk was selected for membership in The National Association of Distinguished Counsel (NADC). Lawyers selected for membership in NADC receive the designation of Nation's Top Attorneys. The NADC is dedicated to promoting the highest standards of legal excellence. Each member is thoroughly vetted by a research team, selected by a blue ribbon panel of attorneys with podium status from independently neutral organizations, and approved by a judicial review board as exhibiting virtue in the practice of law. Only the top one percent of attorneys in the United States is selected for membership in the NADC. Mr. Sistrunk was again selected to the NADC membership through 2018.In January 2016, Mr. Sistrunk was designated a Senior Fellow by the Litigation Counsel of America. Senior Fellow status in the honorary society is reserved for advanced commitment to and support of the Litigation Counsel of America, the Diversity Law Institute and Trial Law Institute.

In October 2016, Mr. Sistrunk was selected by America's Top 100 Attorneys as a Lifetime Achievement recipient. Selection to America's Top 100 Attorneys is by invitation only and is comprised of the nation's most exceptional attorneys whose accomplishments merit lifetime achievement recognition. This once-in-a-lifetime honor is given to less than one-half percent (0.5%) of active attorneys practicing in the United States.

In January 2017, and again in January 2018, Mr. Sistrunk was selected by the National Trial Lawyers to The RoundTable, America's 50 Most Influential Trial Lawyers. In January 2017 he was also certified as a member of the Lawyers of Distinction. Membership is limited to the top 10% of attorneys in the United States. Members are certified and accepted based upon objective evaluation of an attorney's qualifications, license, reputation, experience and disciplinary history.

In April 2018, Mr. Sistrunk was inducted into The Trial Lawyer Hall of Fame. The Trial Lawyer Hall of Fame recognizes and honors those few individuals, both past and present, who have left an indelible mark on the American legal tradition through a lifetime of service to the American public, the Constitution and the American bar.Mr. Sistrunk and his trial teams have attained verdicts and settlements on behalf of his clients in excess of $1Billion.Mr. Sistrunk graduated from North Carolina State University, with honors. He attended Duke University Law School, as an Elvin R. Latty scholar, graduating with a J.D.