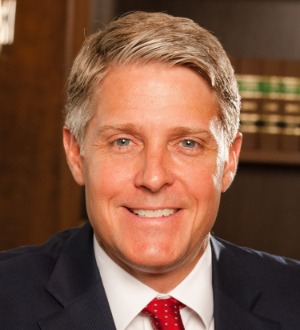 Geddes D. Anderson, Jr. is an experienced “AV” rated trial, appellate and arbitration attorney whose practice emphasizes litigation of civil cases. Prior to founding Murphy & Anderson, Mr. Anderson was a Jacksonville litigation attorney and partner with the litigation law firm Liles, Gavin, Costantino & Murphy. He has handled hundreds of civil cases including business litigation, professional liability, product liability, trucking accident cases, contract disputes, securities litigation, fiduciary disputes and personal injury matters. Mr. Anderson also handles criminal matters in Federal and State Court. He is admitted to The Florida Bar and licensed to practice in all state and federal courts in Florida including the United States District Court for the Northern, Southern and Middle Districts of Florida, and the Eleventh Circuit Court of Appeals. As a Jacksonville litigation attorney, Mr. Anderson has successfully tried more than 60 jury trials and bench trials, presented numerous oral arguments before Florida District Courts of Appeal, and has handled hundreds of arbitrations in AAA, JAMS and FINRA.

Mr. Anderson is also Board Certified by The Florida Bar in Business Litigation, the highest level of recognition for specialization by The Florida Bar requiring significant trial experience, rigorous testing and peer review. He has an “AV Preeminent” rating in the renowned Martindale-Hubbell legal directory, which is reserved for attorneys who have “usually practiced for many years, and [are] recognized for the highest levels of professional excellence.” Mr. Anderson served as President of the Jacksonville Bar Association, whose membership exceeds 2100 attorney members. He has served on the Board of Governors for the Jacksonville Bar Association since 2005. Mr. Anderson is a member of the Federal Bar Association and Trial Lawyers Section of The Florida Bar. Mr. Anderson was selected by his peers among the Best Lawyers in America (2012-present) including Lawyer of the Year in Litigation – Securities in 2018 and Lawyer of the Year in Product Liability Litigation – Defendants in 2017.  He has been recognized in Florida Super Lawyers (2009-present) including “Top 100 Lawyers in Florida” for 2015, 2016 and 2017 and “Top 25 Lawyers in Jacksonville, Florida for 2018”.  Mr. Anderson has been recognized in Florida Trend's "Legal Elite" (2010-present). He also serves as a Master in the prestigious Chester Bedell Inn of Court.

Mr. Anderson attended law school at the University of Florida where his strong advocacy and writing skills earned him a position as a Teaching Assistant for Appellate Advocacy, a member of the Defense Counsel for the University of Florida Student Honor Court, and a student member of the Chester Bedell Inn of Court. After graduating from law school, Mr. Anderson accepted a position as an Assistant State Attorney where he gained extensive jury trial experience prosecuting cases ranging from murder to financial crimes.

Mr. Anderson was born in Atlanta, Georgia and lived in Greenwood, South Carolina and Pensacola, Florida before attending the University of Florida for undergraduate studies. At the University of Florida, Mr. Anderson held a variety of elected and appointed leadership positions in student government and other student organizations, including Florida Blue Key Honor Fraternity. Mr. Anderson earned his B.S.B.A. in Finance, with honors. Prior to attending law school, Mr. Anderson worked in the financial industry for Merrill Lynch & Company. Mr. Anderson resides in Jacksonville, Florida with his wife and three children.