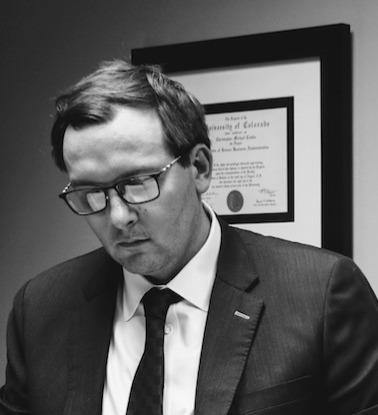 Christopher M. Combs is the Principal Criminal Defense Attorney at Combs Law Group and provides legal counsel on all areas of the firm’s practice.  He was born and bred in St. Louis and has extensive local ties to the St. Louis legal community.  Chris is a highly personable, professional, and compassionate attorney who believes that an attorney-client relationship is built on trust and understanding.  These core principles were the impetus for him to start Combs Law Group in 2014 after working in the St. Louis legal community for a few years.

After graduating from Country Day High School, Chris attended The University of Colorado at Boulder for undergraduate business studies.  During his time in Boulder, Chris began to think about his career plans and started to consider the idea of practicing criminal law in St. Louis.  He realized that becoming an attorney would require some serious commitment to post-graduate studies and long arduous hours throughout his career.  After careful consideration, Chris decided to pursue a career in law and began applying to law schools.  Fortunately for Chris, he was accepted to his St. Louis University Law School, one of his hometown’s top law schools.  So the decision was made to move back to St. Louis and enroll at St. Louis University to study law and work toward a Juris Doctor.

During his time at SLU, Chris worked diligently to build his knowledge and passion for the law. He took on a Teacher’s Assistant position within the law school and was involved in the SLU Undergraduate Mock Trial Team initiative.  Also, he took the opportunity to spend a semester abroad through the SLU Law International Law Study Abroad Program In Madrid & The Hague.  Furthermore, during the last phase of his studies, Chris took on an internship with Judge Gary M Gaertner Jr. to help review case briefs and provide research on several cases.  In addition, Chris worked as an intern for the well-known law firm Rosenblum, Schwartz, Rogers & Glass, P.C.  Here he worked on legal research and writing interoffice memorandums on complex criminal issues, including sentencing memorandums, procedural issue, and discovery matters.

Upon graduating from St. Louis University Law School with a Juris Doctor and passing Missouri Chris decided he wanted to pursue a career in criminal and civil law.  He evaluated the local community of St. Louis criminal lawyers, St. Louis DWI lawyers, and St. Louis personal injury lawyers and made a determination that he wanted to go to work for one of the most recognized firms in the area to the learn the ropes.  So he began seeking out an opportunity at Rosenblum, Schwartz, Rogers & Glass P.C.  He got hired in the fall of 2013 and began to learn the in’s and out’s of the St. Louis criminal law scene.

After working for Rosenblum, Schwartz, Rogers & Glass P.C from 2013 to 2015, Chris decided to start his own St. Louis criminal defense and St. Louis personal injury firm.  The idea was to bring more personalization to criminal law services to St. Louis area clients.  Today, Chris works as the Principal attorney at Combs Law Group and is proud of the fact that he gets involved in each and every case that comes through his firm.  He and his firm have built strong relationships with the local legal community and is becoming known as one of the top criminal defense firms in the St. Louis area.