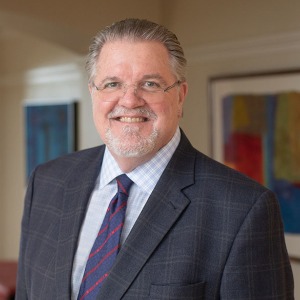 Brian McMillan brings experience and insight from more than 10 years in manufacturing, distribution and sales and more than 26 years practicing law at Brooks Pierce to bear on his counsel to individuals and businesses. His business and corporate practice includes negotiating and drafting distribution agreements, franchise agreements, lease agreements (on behalf of both lessors and lessees), employment agreements, and purchase/sales contracts. He also has extensive experience negotiating and drafting all manner of business contracts and agreements.

Brian also represents land owners whose land has been taken or is threatened with taking by the North Carolina Department of Transportation (NCDOT) and/or local municipalities through the exercise of their power of eminent domain (condemnation). The focus of Brian's condemnation practice is securing fair and adequate compensation for his clients for the land that the government wants to take or has taken. In that regard, in the last 18 years he has negotiated numerous settlements, including six- and seven-figure dollar amounts, and has taken several condemnation cases to trial. Brian also negotiates with condemning authorities prior to condemnation regarding the impact of public projects on land owned by his clients. In some cases, those negotiations include advocating on his client's behalf for road designs or routes that bypass his clients' land.