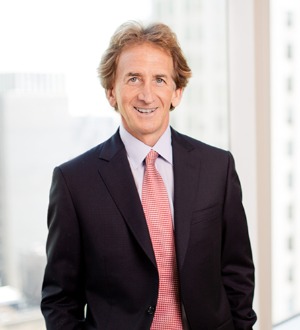 Brad Butwin is the Chair of O’Melveny & Myers LLP, an internationally acclaimed law firm of approximately 750 attorneys in 15 offices worldwide. Under Brad’s leadership, O’Melveny has for eight consecutive years ranked in the top tier of The American Lawyer’s “A-List,” which recognizes the nation’s most “well-rounded” firms in the areas of revenue per lawyer, pro bono commitment, diversity representation, and associate satisfaction—the latter earning the firm a near-perfect score for the last three years. O’Melveny has also been a perennial honoree in The American Lawyer’s “Litigation Department of the Year” competition. And it has been a repeat winner in Vault’s Law Firm Rankings, most recently earning #1 across three key measures—“Best Firm to Work For,” “Best Overall Diversity,” and “Best Summer Program”—a trifecta of honors that no other law firm has achieved.

In addition to his leadership roles, which have included Chair of the Litigation Department, Brad maintains an active practice as a trial lawyer. Chambers USA ranks Brad among the top securities litigators in the nation and has rated him as one of the leading commercial litigators in New York. Chambers reports that Brad is “extremely dedicated to his clients,” who describe him as a “brilliant mind” and “standout lawyer” who “is always reachable and responsive, [and] always wants to help.” Benchmark Litigation has regularly named Brad a “Local Litigation Star,” a “National Litigation Star,” and a “National Securities Star,” and consistently lists him as one of the country’s top securities litigators. The Legal 500 has recognized Brad’s securities litigation practice, Lawdragon lists Brad among its “500 Leading Lawyers in America,” and Best Lawyers identifies Brad as a leading commercial litigator.

Committed to the communities O’Melveny serves, Brad is a dedicated board member of the Leadership Council on Legal Diversity (LCLD), which promotes a more open and diverse legal profession. He recently received a 2019 LCLD Compass Award, a designation that recognizes the most active LCLD individuals and organizations. Brad is also active on the boards of Only Make Believe, a nonprofit that creates and performs interactive theater for children in hospitals and care facilities, the Legal Aid Society, the Supreme Court Historical Society, and the American Society of Legal Writers. In an effort to bring affordable legal representation to underserved communities, Brad cofounded the Court Square Law Project, an innovative public-private collaboration that pairs new law school graduates with clients of modest means. The American Bar Association named the Court Square Project the 2019 recipient of the Louis M. Brown Award, which recognizes exemplary programs that enable affordable access to legal services for those of moderate incomes. A longtime supporter of Fordham Law School, Brad is the Chairman of the Financial Aid Campaign and a member of the Dean’s Planning Council.

For his dedication to justice, Brad received the Human Relations Award from the New York Lawyers Division of the Anti-Defamation League. He was also presented with the New York City Bar Association’s Thurgood Marshall Award for his role in freeing a wrongly convicted man from Georgia’s death row. In recognition of his outstanding achievement in the law, the Fordham Law Alumni Association awarded Brad its Medal of Achievement, the highest honor it bestows, and the Fordham Law Review Alumni Association awarded Brad its Leonard F. Manning Achievement Award in recognition of his professional achievements.

Before entering private practice, Brad served as a law clerk for US District Judge David N. Edelstein (S.D.N.Y.). Brad received his J.D. from Fordham Law School, where he served as Commentary Editor of the Law Review, and his B.B.A. in Risk & Insurance from the University of Wisconsin. He and his wife, Randi, have four children, three of whom played Division I soccer at the collegiate level and now attend or attended law school; their youngest, age 16, is a talented dance instructor. Brad and Randi were recently honored by Temple Judea of Manhasset for their many years of dedicated service to the temple and the community. A longtime Vice-President, Board Member, and Premier Program Director of the Albertson Soccer Club, Brad received its Lifetime Achievement Award.