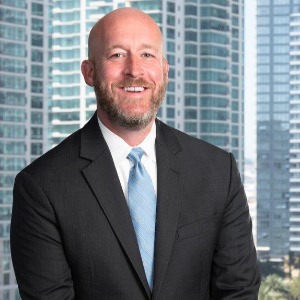 Having spent a decade as a federal prosecutor and several years in private practice, Andrew Young brings his extensive knowledge, savvy and experience to his white collar criminal defense, government investigations and civil litigation practice.

Andrew is a strategic thinker who is laser-focused on achieving the right result in the most efficient way possible. And for those disputes that must go to trial, he has the courtroom experience and presence needed to take a case all the way to the jury.

Andrew previously served as a federal prosecutor, both as an Assistant U.S. Attorney in in the Major Frauds and Public Corruption Unit in the United States Attorney’s Office for the Southern District of California, and as a trial attorney in the U.S. Department of Justice’s Tax Division. In those roles, he secured more than 100 convictions and the seizure of more than $35 million in cases involving corporate fraud, money laundering, public corruption, RICO violations, bankruptcy fraud, and tax fraud.  Andrew also served as the Bankruptcy Fraud Coordinator for the U.S. Attorney’s Office.

He successfully tried more than a dozen complex, multi-week cases throughout the country, including in California, Ohio, Pennsylvania, and New York. As a prosecutor, Andrew also led the first-of-its-kind prosecution of a telecommunications company CEO for supplying encryption services to transnational criminal organizations. Andrew was also one of the chief architects and the lead prosecutor of Operation Trojan Shield, a three year FBI-run operation targeting transitional organized crime. The operation was described by Europol as “the most sophisticated effort to date in disrupting the activities of criminal operation from all four corners of the world.” As the lead prosecutor, he led a team of more than twenty agents and prosecutors, and worked directly with senior members of the U.S. Department of Justice, including at the Office of the Deputy Attorney General (DAG), the General Counsel’s Office of the Federal Bureau of Investigation, the Office of International Affairs (OIA), the Office of Enforcement Operations (OEO), and the Computer Crime, Intellectual Property Section (CCIPS). He also worked with prosecutors and agents from Australia, the Netherlands, the United Kingdom, Belgium, Germany, Spain, Canada and New Zealand to coordinate global efforts targeting criminal enterprises that provided encryption services to criminals. Andrew’s work on those matters was covered in the Washington Post, The New York Times, Rolling Stone, Business Insider and numerous other publications throughout the world.

Andrew focuses his practice in the areas of white collar criminal defense, compliance, internal investigations, and complex business litigation, providing targeted counsel and representation based on his deep knowledge of federal criminal and tax laws. Drawing upon his experience managing large international teams, he takes the reins of even the most challenging cases, managing the parties and processes involved to the best possible resolution.

As a litigator and trial lawyer, Andrew focuses on being tactical and straightforward, making him an effective communicator. He is known for being calm and collected even under intense pressure, and for working collaboratively.

Andrew is not regularly admitted to practice in the local courts of Minnesota.