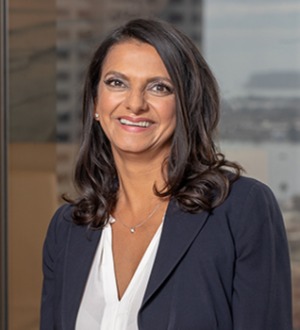 Alreen Haeggquist is dedicated to representing employees who have been wrongfully terminated, harassed, and discriminated against at work. Over the past 17 years, she has recovered millions of dollars for her clients in cases involving wrongful termination, sexual harassment, discrimination, retaliation, and wage theft. She founded Haeggquist & Eck in 2008 and serves as the firm’s managing partner.

Alreen’s passion for representing employees started at a very early age.  Her parents immigrated to the United States to create a better life for their family, and watching them work tirelessly to provide her with every opportunity informed her unwavering commitment to advancing human rights and giving a voice to the underrepresented. Today, the overwhelming majority of Alreen’s clients are women who have suffered egregious wrongs at the hands of their employers. No defendant is too large or powerful for her to tackle: she has recently represented plaintiffs in employment claims against such major corporations as Trader Joe’s, Sharp Healthcare, Wyndham, Kaiser Permanente, and the Grand Del Mar.  In 2017, her jury trial verdict in a disability discrimination case against Kaiser Permanente was awarded one of the Top 50 Employment Verdicts in California. In 2018 alone, Alreen represented a female scientist in a well-publicized gender discrimination case against The Salk Institute, which ended with a confidential settlement shortly before trial.  That same year, she also secured a confidential settlement on behalf of an employee of Jollibee, a national fast-food chain, in a case involving claims of sexual harassment, which after the motion for fees, totaled over $1.2 million.

Alreen also served as class counsel in the high-profile consumer fraud litigation against presidential contender Donald Trump and Trump University, which settled in November 2016 for $25 million.  The settlement was deemed one of California’s Top 50 Class Action Settlements in 2016. For their seven years of work in the case, Alreen and her partners took no fees or costs.

Alreen’s commitment to equality, respect, and giving a voice to all, despite race, religion, gender, or disability drives her every day to do her very best for each person who entrusts her with that opportunity. She comes from a very large family and treats each one of her clients as an extension of her own, and believes each of her clients should have the same quality of representation that she would want for her loved ones.  When Alreen is not fighting for equality, she loves spending time outdoors with her husband, Michael, and their daughter, Maya.